'Sonam Kapoor Is Nuts,' Rhea Reveals Her Sister's 'Dramatic' Side 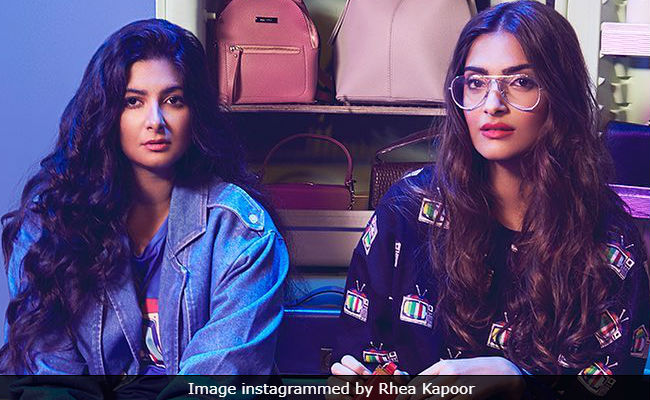 Sonam and Rhea during a photoshoot for Rheson. (Image courtesy: Rhea Kapoor)

Rhea Kapoor described her elder sibling Sonam Kapoor is "crazy and nuts" in an interview to Firstpost. Reason? Well, Rhea told Firstpost that she initially opted out of the London vacation at the time of Sonam's birthday so that she could spend more time with her husband Anand Ahuja but Rhea said: "Sonam is sooo dramatic... She behaved like missing her birthday (on June 9) means like the world has ended. Sonam's nuts." Sonam and Anand got married on May 8 in a simple Sikh ceremony which was followed by an elaborate reception. Soon after the wedding festivities, Sonam travelled to Cannes Film Festival and then jumped into the promotion of Veeree Di Wedding.

.... And eventually Sonam succeeded in bringing Rhea along.

Rhea Kapoor said that she and Sonam have been 'best friends' from childhood and there never was any sibling rivalry between them. She told Firstpost: "We were always so different and close. Our worlds never overlapped in that way. Nothing makes me happier than seeing Sonam succeed and I think it's the other way around as well. We feed off each other. She's been my biggest support... I couldn't have asked for a better partner than my sister. We complement each other perfectly."

Rhea explained by the example of Veere Di Wedding: "No mainstream actress would have done Avni's role, the story revolves around Kalindi's (Played by Kareena Kapoor) wedding. It's just my sister's trust in me, in the content and her ability that she did this film. It goes to show that we completely trust each other."

Promoted
Listen to the latest songs, only on JioSaavn.com
Rhea credits her mother Sunita Kapoor's upbringing. "My Mum has been super amazing about this. She always made sure we complemented each other, that we felt equally loved and valued. So it has a lot to do with my mother and father. We're co-dependent. We can't live without each other," she was quoted as saying.

Rhea Kapoor is the producer of Veere Di Wedding.