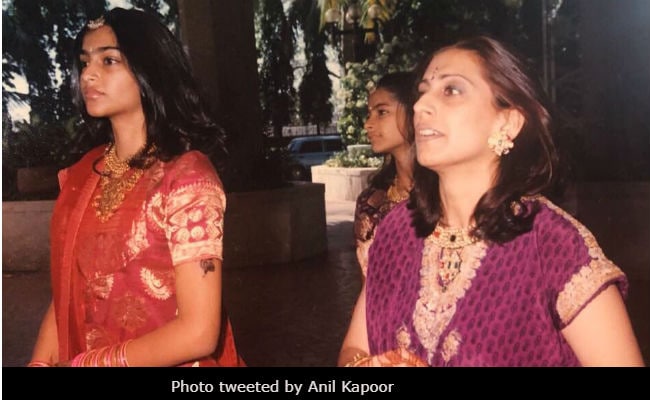 New Delhi: Sonam Kapoor turned 33 on Saturday and the actress' birthday celebrations included husband Anand Ahuja and sister Rhea Kapoor in London. For Sonam, her birthday this year happens to be very special since it's her first birthday post her wedding with Anand Ahuja. Sonam has been chilling in London with her veeres for a while now and Anand Ahuja touched down in the British capital just in time to celebrate her birthday.On Sonam's special day, friends and family poured in their wishes on social media. Anand Ahuja was one of the first ones to wish Sonam for her birthday. The Delhi-based entrepreneur curated a throwback photo of Sonam and Instagrammed it with this caption: "The look when Sonam Kapoor sees her birthday! That's just my way of downplaying just how breath taking this picture is!"

The look when @sonamkapoor sees her birthday... That's just my way of downplaying just how breath taking this picture is! Happy Birthday!!

@sonamakapoor, u were the best bridesmaid on-screen & the most beautiful bride in real life. U've shown the world, once again, what an incredible force u are. & with @anandahuja by your side, you're gonna soar higher & prouder than ever! Happy B'day jetsetter!! Missing u & Mom! pic.twitter.com/ZhCznq2fb9

Happy happy birthday to my amazing , wonderful, generous and lovely daughter.. love you so so much.. have the best birthday ever ..@sonamkapoor

#LoveYouSonam May we always have secrets to discuss

Swara Bhasker, who has worked with Sonam in films like Raanjhanaa, Prem Ratan Dhan Payo and the very recent Veere Di Wedding, wished her close friend with a heartfelt message. Swara shared a photo from Sonam's mehendi function and captioned it: "Happy, happy birthday Sonam Kapoor from behen in Raanjhanaa to veere in Veere Di Wedding via Prem Ratan Dhan Payo knowing you has meant knowing that friendship and solidarity can exist even in this glittering world of glamour and showbiz. Thank you for always looking out for me! May each year bring greater happiness, peace and fulfillment to you! love you and happy birthday! P.s. Sorry I couldn't be there!"

Happy happy birthday @sonamakapoor knowing u has meant knowing that friendship & solidarity can exist even in this glittering world of glamour and showbiz.. May each year bring greater happiness, peace and fulfilment to you! love uuuuuuu and happy birthday! @reelsandframespic.twitter.com/Nyhll35bwl

Promoted
Listen to the latest songs, only on JioSaavn.com
Diana Penty, Riteish Deshmukh, Aditi Rao Hydari, Tanishaa Mukerji and others also wished the actress on her birthday. Here's what they said:

Happy Birthday Dear @sonamakapoor & congratulations on the super success of #VDW ...this year has been great for you, may the coming years be even better. Much Love.

Happy Happy Birthday, gorgeous!! Hope you have a super duper day and a rocking year ahead! Lots of love always @sonamakapoor

Happy happiest birthday @sonamakapoor... what an amaaaaaazing year it's been and I hope it keeps getting better... biggest hug and lotssssss of love

Life should not be just lived... It should be celebrated!
Happiest birthday to the most stylish girl in Bollywood : @sonamakapoor
Wishing you everyday of celebration and life full of love, laughter, joy and happiness! #birthdaygirl#stylish#styleicon#fashionqueenpic.twitter.com/1i8x2FdGrt

With Veer Di Wedding making an impressive mark at the box office, it appears to be a happy, happy birthday for the actress. The actress is also gearing up for her next film Sanju, directed by Rajkumar Hirani. Sanju is the biopic based on the life of Sanjay Dutt. Ranbir Kapoor will be seen playing the role of Sanjay Dutt and Sonam Kapoor will star as the actors love interest. Sonam will also be seen opposite Dulquer Salmaan in The Zoya Factor. The film is based on Anuja Chauhan's bestselling novel of the same name.