Sonam Kapoor Has Been A 'Lucky Charm' Ever Since She Was Little. See Pic

"Being a lucky charm in red even as a kid!" wrote Sonam Kapoor 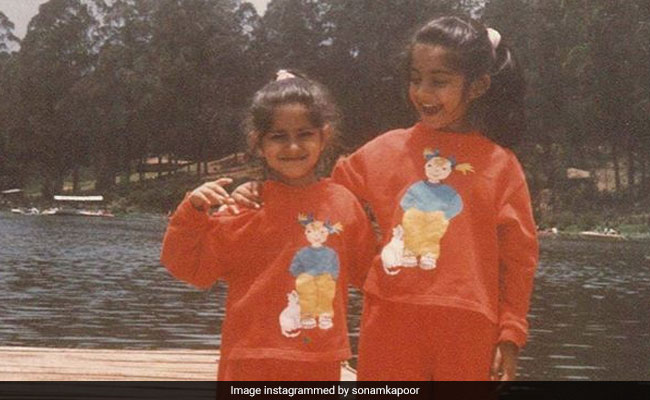 If you are having a dull day, this throwback picture of Sonam Kapoor will definitely make your day. On Thursday, the Aisha actress made a trip down the memory lane and shared a blast from the past on her Instagram profile, which also features her sister Rhea Kapoor. Sharing the throwback photo, in which Sonam and Rhea can be seen twinning in red sweaters and red trousers, the actress wrote: "Being a lucky charm in red even as a kid!" In case you are wondering about her "lucky charm" reference, Sonam's caption has a connection with her upcoming film The Zoya Factor, in which she plays Zoya Solanki, who is considered to be a good luck charm for the Indian Cricket team. Zoya considers red as her lucky colour.

Check out the throwback picture:

Being a lucky charm in red even as a kid! #ThrowbackThursday #TheZoyaFactor @rheakapoor

In a previous throwback post, Sonam Kapoor wrote about her love for travelling: "I've always been the happiest while travelling."

On her actor cousin Arjun Kapoor's birthday, Sonam dug out this priceless photo and wrote: "Whether we're flash dancing in the streets or chasing slopes, it's never a dull moment. You bring so much laughter and weirdness to my life, and all those around you that we really wouldn't have it any other way."

Happy Birthday Arjun! Whether we're flash dancing in the streets or chasing slopes, it's never a dull moment. You bring so much laughter and weirdness to my life, and all those around you that we really wouldn't have it any other way. I wish you the best birthday, and all my love @arjunkapoor #BrothersSister

Sonam Kapoor has established herself as a bonafide fan of throwback pictures. We have handpicked some of her best throwback photos for you. Take a look:

One day definitely isn't enough to celebrate how much you mean to me. Dad, you have always been my superhero. Happy Father's Day!! Love you so much @anilskapoor #HappyFathersDay

Dear Rheebee... happy happy birthday my darling sister. You're my best friend, soulmate and partner. No one compares to you and your love for all of us. Hope this year you kill it with love, life and making the most epic movies. @rheakapoor

On the work front, Sonam Kapoor awaits the release of The Zoya Factor, which will open in theatres on September 20. The film also features Dulquer Salmaan as the lead actor.