"Same To Same": The Internet Can't Spot The Difference Between Saif Ali Khan And Son Taimur In This Pic 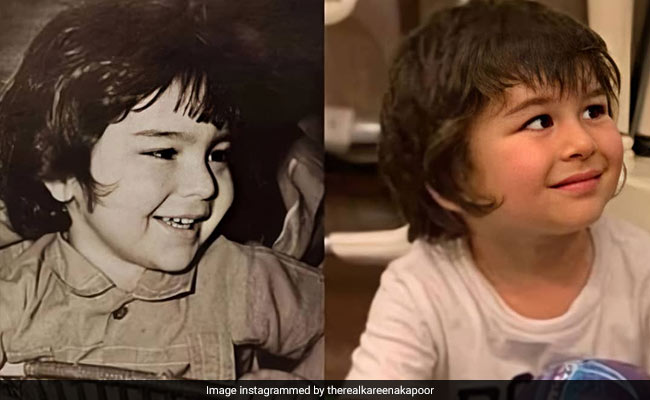 The Internet chanced upon a million-dollar throwback picture of Saif Ali Khan and we can't keep calm for multiple reasons. To begin with, the 49-year-old actor looks super cute in the photograph. Secondly, he looks exactly like his 3-year-old son Taimur Ali Khan. Saif might be a social media recluse, but thanks to the multiple fan clubs dedicated to him and his actress-wife Kareena Kapoor, we got a glimpse of the priceless picture. A picture collage of Saif and Taimur was shared by several fan clubs on Instagram. Comments like "can't spot the difference" and "same to same" were seen. "Like father, like son," wrote an Instagram user. "Oh My God... Exactly same," added another.

Kareena Kapoor, who recently made her debut on the photograph sharing application Instagram, shared a lovely picture along with her son Taimur and she captioned it: "The only one I will ever allow to steal my frame." This is the post we are talking about:

The only one I will ever allow to steal my frame... a>

On the work front, Saif Ali Khan has a super busy schedule. The actor starred in the period drama Tanhaji: The Unsung Warrior and comedy drama Jawaani Jaaneman , this year. Saif has films like Hunter and Bhoot Police in the pipeline.

Meanwhile, Kareena Kapoor was last seen in the hit film Good Newwz, co-starring Akshay Kumar, Diljit Dosanjh and Kiara Advani. The actress will next be seen in Karan Johar's period drama Takht and Aamir Khan's Laal Singh Chaddha, which is a remake of the 1994 film Forrest Gump.