"Thanks to all the technicians of the industry who can make any look believable," wrote Chiranjeevi 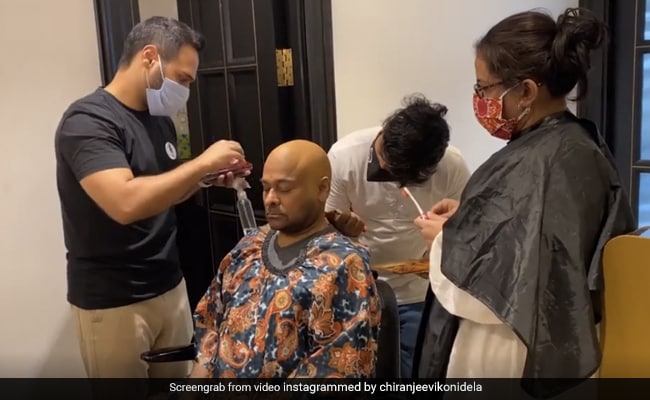 Chiranjeevi in a still from the video. (courtesy: chiranjeevikonidela)

Superstar Chiranjeevi's latest Instagram entry put him on the top of Wednesday's list of trends. Remember the picture that Chiranjeevi posted of his new look a few days ago on social media, the one in which he could be seen with a shaved head? Well, turns out that the actor never really shaved his head and that his "urban monk" look was a result of make-up and the "magic of cinema." On Tuesday, the actor posted a video from his dressing room, which showcased his drastically different hair transformation. He captioned the video: "Thanks to all the technicians of the industry who can make any look believable. Salute the magic of cinema."

Thanks to all the technicians of the industry, who can make any look believable. Salute the magic of cinema!

A post shared by Chiranjeevi Konidela (@chiranjeevikonidela) on Sep 14, 2020 at 9:31pm PDT

For those who missed it, a few days ago, Chiranjeevi shared a picture of his new look on social media and he captioned it: "Urban monk." Ram Charan reacted to his father's Instagram picture with a comment that read, "Appaaaaaaa! What did I just see?" Chiranjeevi's nephew Varun Tej also left a comment that read, "Woah! Looking great daddy." ICYMI, this is the post we are referring to:

In terms of work, Chiranjeevi was last seen in the 2019 film Raa Narasimha Reddy, which also starred Amitabh Bachchan in a pivotal role. He will next be seen in Telugu film Acharya, directed by Koratala Siva. It will be the 152nd movie of his career.

Besides Telugu movies, Chiranjeevi has also starred in Tamil, Hindi as well as Kannada films. He debuted on the big screen in 1978 and has acted in over 150 films. He has featured in several Telugu movies some of which include Swayam Krushi, Rudraveena, Indra and Aapathbandavudu.