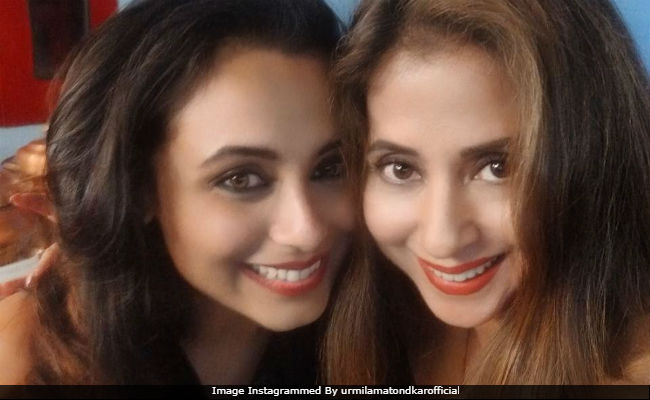 New Delhi: Rani Mukerji's Hichki, which releases this Friday, was reviewed by the actress Urmila Matondkar. "Congratulations dearest Rani on yet another superlative performance. Very difficult to pull it off and you've done it with so much ease and poise in Hichki. Movie will leave you with a sweet smile, moist eyes and high spirits. Kudos to team Hichki and Rani Mukerji," Urmila wrote on Instagram while adding a picture with Rani. Hichki stars Rani as Naina Mathur, a teacher who struggles with Tourette syndrome. The film is directed by Siddharth P Malhotra and produced by Maneesh Sharma for Yash Raj Films, owned by Aditya Chopra (Rani's husband).

Congratulations dearest Rani on yet another superlative performance..very difficult to pull it off and uve done it with so much ease n poise in #hichki..movie will leave u with sweet smile moist eyes n high spirits kudos to team #hichki n #ranimukherjee

A post shared by Urmila Matondkar (@urmilamatondkarofficial) on Mar 19, 2018 at 7:45am PDT

Actors Madhuri Dixit and Anil Kapoor have also reviewed Rani's Hichki. Madhuri Dixit watched the film at a special screening in Mumbai hosted last week. "Hichki is a moving and heart-warming film helmed by a brilliant story with a wonderful cast. A strong content-driven film, very well-directed by Siddharth P Malhotra and of course another stupendous performance by Rani," she shared. Madhuri had broke down after watching Hichki, said a statement from Yash Raj Films.

Hichki is a moving and heartwarming film helmed by a brilliant story with a wonderful cast. A strong content driven film, very well directed by @siddharthpmalhotra and of course another stupendous performance by #Rani. Kudos to Team @yrf

Rani Mukerji's Nayak co-star Anil Kapoor said that he 'absolutely loved Hichki.' "Watched Hichki last night and absolutely loved it! The whole team has done an exceptional job especially the kids & Neeraj Kabi. And Rani, you are my new favourite teacher! Your performance has left me speechless," tweeted Anil Kapoor.

Watched #Hichki last night and absolutely loved it! The whole team has done an exceptional job especially the kids & #NeerajKabi! And Rani you are my new favourite teacher! Your performance has left me speechless! pic.twitter.com/Xrxlx62rDg

#Hichki is a feel good and extremely sensitive film....adresses a disorder with dignity and strength....#RaniMukerji is the soul and life of this film! She is absolutely brilliant!!!! And reminds you of her exceptional talent again!!!!

#Hichki takes you back to school and gives you life lessons in such a nuanced and beautiful way! Well done @sidpmalhotra for directing this film with such an assured hand and with such sensitivity! Must watch!!! #hichki

#yessssssssss #film #hichki #privateviewing #yashrajstudio What a performance #ranimukerjichopra #whistle x infinity!!!I cried my lungs out in the second half!!! My #respect to all the actors & director #siddharthmalhotra who has dealt with a sensitive topic like #tourettesyndrome with absolute sincerity!!! Rani insisted I show the film to Renee & Alisah, and so I did... good call!!! All the best to the entire team of #filmhichki girlpower #pride #aweinspiring #loveit #sharing #us love you guys!!!