The guests at the couple's reception party included Haryana chief minister Manohar Lal Khattar, among others 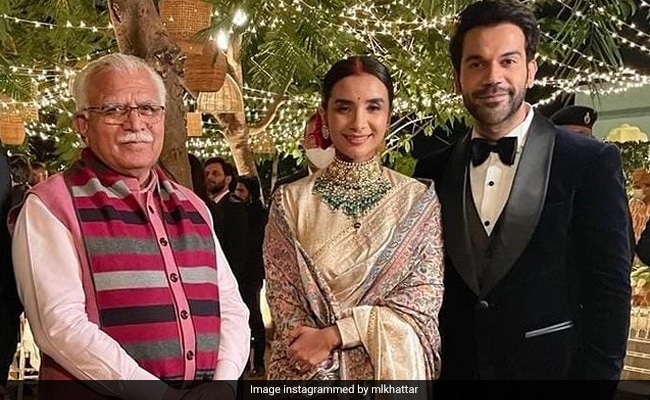 After a dreamy wedding, Rajkummar Rao and Patralekhaa hosted a grand reception in Chandigarh on Monday night. The guests at the couple's reception party included Haryana chief minister Manohar Lal Khattar among others. He shared a glimpse of the celebrations on social media at midnight and congratulated Rajkummar and Patralekhaa with these words: "Attended the wedding ceremony of famous Bollywood actors Rajkumar Rao and Patralekhaa in Chandigarh and gave the bride and groom blessings and wished them a successful married life." On their reception, Patralekhaa was looking every bit of gorgeous in a cream silk saree by Sabyasachi that she paired with heavy jewellery and a shawl while Rajkummar complemented her in a black tuxedo.

On Monday evening, Rajkummar Rao and Patralekhaa shared pictures from their wedding and accompanied them with loved-up notes for each other. "Finally after 11 years of love, romance, friendship and fun, I got married to my everything today, my soulmate, my best friend, my family. Today there is no greater happiness for me than being called your husband Patralekhaa. Here's to forever .. and beyond," wrote Rajkummar Rao while Patralekhaa's caption read: "I got married to my everything today; my boyfriend, my partner in crime, my family, my soulmate...My best friend for the last 11 years! There is no greater feeling than to be your wife! Here's to our forever..."

Patralekhaa made her debut in Bollywood opposite Rajkummar Rao in CityLights in 2014. By this time, Rajkummar had starred in critically-acclaimed films like Kai Po Che!, Shahid, Omerta, Aligarh and Love Sonia.