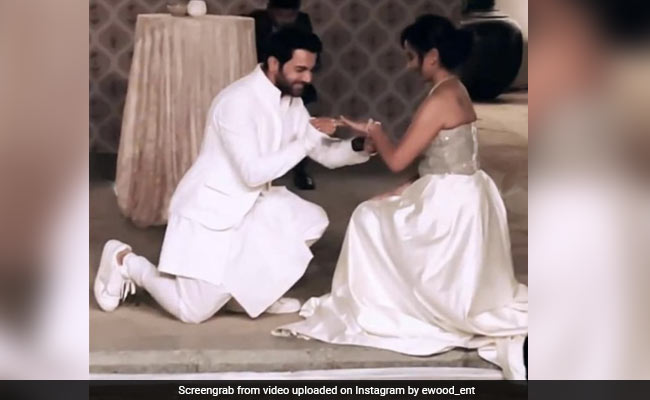 Rajkummar Rao and long-time girlfriend and actor Patralekhaa got engaged in an intimate pre-wedding ceremony in Chandigarh on Saturday night. The couple will reportedly get married tonight. The video from Rajkummar Rao's  proposal is all over the Internet. For the engagement ceremony, the couple was seen twinning in white ensemble. Patralekhaa was a vision in white and silver slit gown with a long trail, while Rajkummar looked charming in a white kurta, which he wore with matching sneakers. Rajkummar went down on one knee to propose to Patralekhaa as did she. After the couple exchanged wedding rings, Ed Sheeran's Perfect started playing in the backdrop and Rajkummar and Patralekhaa started dancing.

See the video of the proposal here:

Here are a few pictures from the ceremony:

Rajkummar Rao and Patralekhaa have been dating for over 6 years. They co-starred in CityLights. In her piece for Humans of Bombay, a few years ago, Patralekhaa wrote about her and Rajkummar Rao's love story and wrote: "It was magic. The kind of passion he had was powerful and I couldn't respect him any more than I did then! We spoke about our work, love for cinema, passion... I saw him through his struggles, never giving up. How could we not fall for each other?"