Pulkit Samrat And Kriti Kharbanda Are All Set To Go. But Where?

Pulkit and Kriti are also not going anywhere. They just had a fun conversation on Instagram to describe their current mood 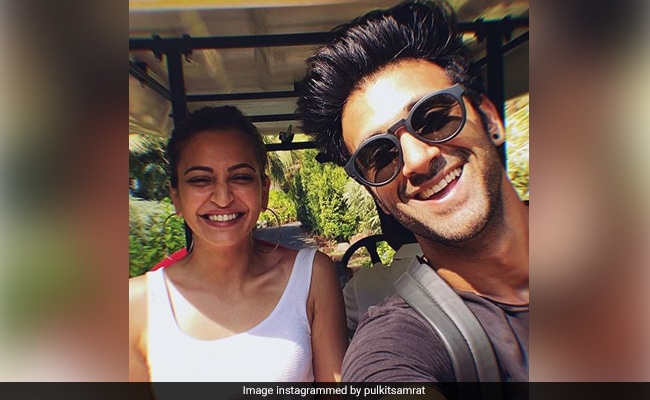 Pulkit Samrat and Kriti Kharbanda, who have moved in together during the lockdown, are all set to take off... but where? India is in its third phase of lockdown, imposed to curb the spread of the coronavirus pandemic. And Pulkit and Kriti are also not going anywhere. They just had a fun conversation on Instagram to describe their current mood - that they can't wait to travel again. Pulkit shared an adorable selfie, featuring himself and girlfriend Kriti, and captioned it: "Chalein?" Kriti made an appearance in the comments section and wrote: "Chalo." Kriti and Pulkit's photo appears to be a vacation memory, in which the couple can be seen enjoying a ride on a resort buggy. Take a look at Kriti and Pulkit's "chalein?-chalo!" mood here:

Ahead of the lockdown, Kriti Kharbanda attended the engagement festivities of Pulkit Samrat's brother in Delhi. In an interview with Mumbai Mirror, she said that after returning to Mumbai, she thought she has the coronavirus as she caught a cold: "I thought it best not to mingle given the symptoms. I was terrified I had contracted the virus but since test kits were not available in the country back then and I did not have a fever, the doctors advised me to distance myself and monitor my symptoms."

Meanwhile, every day is a culinary fest for Kriti Kharbanda with Pulkit Samrat in the kitchen. He has been baking some delicious items during the lockdown.

You're welcome @pulkitsamrat . I'm glad I bring out the best in you. Did u ever think you would bake PAV for me!? the bhukkhad in me is very impressed Haan! Muahhh! #blessedwiththebest #midnightcravings #foodstagram

In a recent post, the Housefull 4 actress revealed she misses pole dancing as a work-out activity.

Throwback to my favourite form of workout! Definitely regret not installing a pole at home. Adding this to my to-do list post the lockdown! What's on your list !? What do u really miss doing!?

Kriti and Pulkit are co-stars of 2019 film Pagalpanti, ahead of which they also worked together in Veerey Ki Wedding, released in 2018.