Priyanka Chopra Was 'Scared' Of Farhan Akhtar During Don Shoot. Here's Why

"Farhan gave me one of my biggest films, when I was two years in the business," said Priyanka Chopra 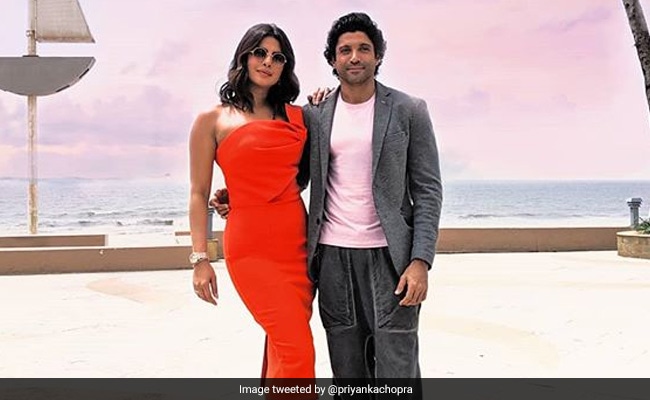 Priyanka Chopra, who reunited with Farhan Akhtar for The Sky Is Pink, revealed that she was "scared" of him when they first collaborated for the 2006 film Don. Farhan Akhtar's Don featured Shah Rukh Khan, Priyanka Chopra, Lara Dutta and Boman Irani in the lead roles. In an interview with Bollywood Life, Priyanka Chopra recalled the time when she was directed by Farhan in Don and said: "I was scared of him, I was scared of talking to him. He was Farhan Akhtar after Dil Chahta Hai and I had just done Andaaz and Mujhse Shaadi Karoge. I was like, I am working with this director."

"Farhan gave me one of my biggest films, when I was two years in the business. So, he has known me from when I was just learning acting," she added.

Farhan Akhtar made his directorial debut with the 2001 blockbuster Dil Chahta Hai, which starred Aamir Khan, Saif Ali Khan and Akshaye Khanna as the lead actors. The movie also won the National Film Award for the Best Feature Film in Hindi in 2001.

Since Don, Priyanka Chopra and Farhan Akhtar have worked together in Don 2 (with Farhan as the director) and in Dil Dhadakne Do (as co-stars). Dil Dhadakne Do was directed by Farhan Akhtar's sister Zoya Akhtar. The film, which also featured Ranveer Singh, Anushka Sharma, Anil Kapoor and Shefali Shah in pivotal roles, was critically acclaimed for its story.

Joining Priyanka Chopra in the aforementioned interview, Farhan Akhtar, when asked if he had seen any changes in Priyanka post the stardom, said she has "not changed" given all the success. "I don't see any major changes in her. She is still the same Priyanka that I had met in 2005 to cast for Don. I actually find it wonderful; the fact that she has not changed given all the success and fame and the stardom she has seen. That she has stayed true. When she did Don 1, she was very new and now in 2019, she is very experienced as an actor. She has picked up things along the way and that growth, I do see. But who she is at the core is still the same person," Farhan told Bollywood Life.

Priyanka and Farhan's latest film The Sky Is Pink released on October 11. The film received a standing ovation at the Toronto International Film Festival, where it was screened last month. The Sky Is Pink is based on the life of late motivational speaker and author Aisha Chaudhary, who was born with an immunodeficiency disorder and was diagnosed with pulmonary fibrosis at the age of 13. She later died at 18 in 2015.