The Sky Is Pink box office collection: The film gained momentum on its second day but managed to collect only Rs 4.20 crore on Sunday 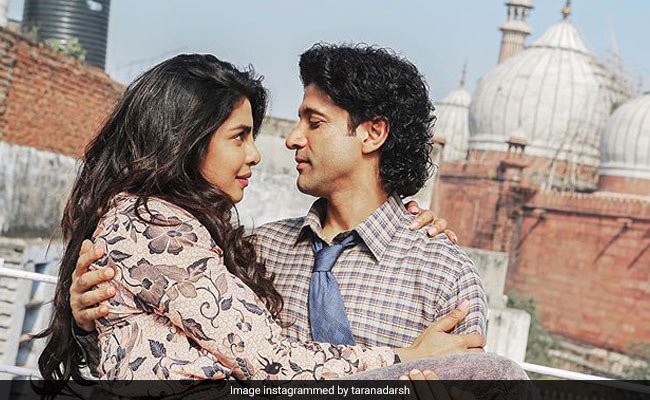 The Sky Is Pink box office collection: A still from the film. (Image courtesy: taranadarsh)

Priyanka Chopra and Farhan Akhtar's The Sky Is Pink registered low numbers on its third day at the box office. The film, which gained momentum on Saturday, "fell flat" on Sunday, reported trade analyst Taran Adarsh. The Sky Is Pink managed to collect over Rs 4 crore on the third day, bringing the overall collections to Rs 10.70 crore. According to the report by Taran Adarsh, the film's target audience didn't "embrace" it wholeheartedly. Sharing the box office performance of the film, Taran Adarsh wrote: "The Sky Is Pink is dull... Gathered momentum on Day 2 [Saturday] but fell flat on Day 3 [Sunday], more so towards evening shows... Even its target audience - multiplex crowd - didn't embrace it wholeheartedly... Friday 2.50 crore, Saturday 4 crore, Sunday 4.20 crore. Total: Rs 10.70 crore. India business."

Directed by Shonali Bose, The Sky Is Pink is based on the life of motivational speaker Aisha Chaudhary, who was born with an immunodeficiency disorder and was diagnosed with pulmonary fibrosis at the age of 13. She died at 18 in 2015. Zaira Wasim plays Aisha while Priyanka Chopra and Farhan Akhtar play her parents in the film.

The Sky Is Pink opened to great reviews on Friday. Reviewing the film for NDTV, film critique Saibal Chatterjee wrote: "The Sky Is Pink, scripted by Bose with Nilesh Maniyar, errs on the side of sustained cheeriness, enhanced appreciably by the presence of Chopra in the role of a mother who puts her career on hold and works determinedly to take care of Aisha."

Remembering Kirk Douglas: From Champion To Spartacus - His Six Most Famous Films