The Sky Is Pink Movie Review: Aisha is fleshed out with charm and conviction by Zaira. Farhan provides the perfect foil to the poised Priyanka. 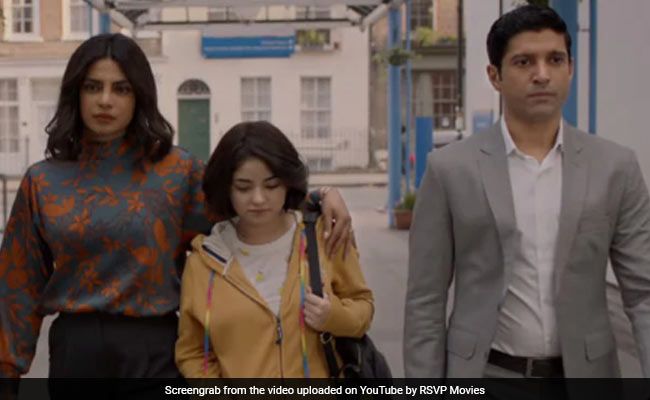 The Sky Is Pink Movie Review: Priyanka, Farhan and Zaira in a still from film. (Image courtesy: YouTube)

A terminally ill 14-year-old girl, fleshed out with charm and conviction by Zaira Wasim, is at the heart of Shonali Bose's The Sky Is Pink. But when the film opens, the character is already dead. Zaira isn't, therefore, the principal star of the show. Priyanka Chopra, making a comeback to Bollywood in the role of the girl's stressed but always-in-control mom, is. 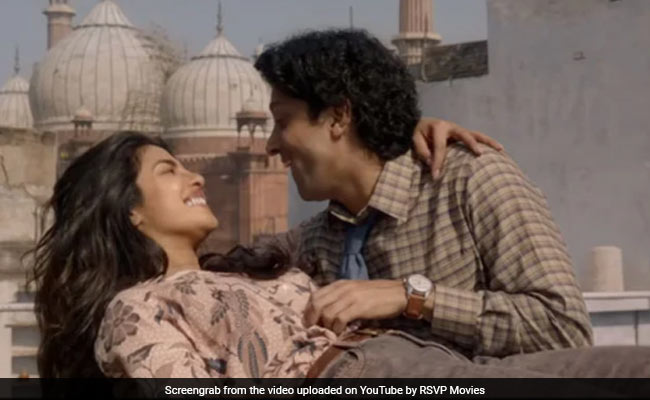 Priyanka and Farhan in The Sky Is Pink.

Priyanka Chopra lends the film a starry edge. Conversely, her glam persona tends to be at odds at times with the overall tone of the poignant drama. What works in her favour outweighs what doesn't by a whisker. That is good enough to make The Sky Is Pink a touching, tender portrait of a couple dealing with the responsibilities of raising a daughter whose days are numbered.

Shonali Bose's first two directorial ventures - Amu and Margarita, With A Straw - were diligently crafted cinematic essays inspired by personal experiences. The two films were separated by a decade but united by their uncompromisingly independent spirit. The Sky Is Pink employs decidedly simpler and markedly more popular methods to script another cinematic account drawn from real life. 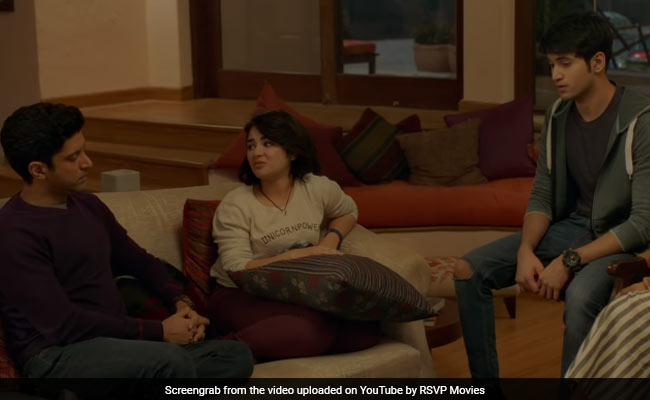 Farhan, Zaira, Rohit and Priyanka in a still from the film.

Four years after she is diagnosed with pulmonary fibrosis, a result of the bone-marrow transplant and chemotherapy sessions she underwent as an infant, the gifted Aisha (Zaira Wasim) loses her battle with death. But her spirit lives on to narrate the story of her own death and that of her parents, Aditi and Niren Chaudhary (Priyanka Chopra and Farhan Akhtar).

The posthumous narration device (a from-beyond-the-grave voiceover is always tricky but the director keeps a tight grip on it) makes it abundantly clear from the word go that the focus is going to be more on the bereaved couple than the deceased girl. Just as well. Aisha's story is too well-documented to bear repetition in a two-and-a-half-hour film.

Comparatively less is known about how Aisha's slow withering away affected her mom and dad, Moose and Panda to her. Of the 25-odd years that the two have been married, 18 have been consumed by their single-minded mission to extend the life of their ailing daughter and make her final years as happy and fulfilling as possible.

The girl's perilous state takes a toll on the couple's relationship. That is from where the drama of The Sky Is Pink springs but without ever lapsing into overt sentimentality. It is a tale about death that is at once melancholic and life-affirming, seen through the eyes of the girl who is now beyond the pale of pain and suffering.

The Sky Is Pink has to reckon with an obvious disadvantage. The audience is aware that the girl will die before she turns 19. The screenplay faces the challenge head-on, creating an affecting portrait of a gifted child who writes, paints and lives life to the lees helped along by a mother who will settle for nothing less than the best for her daughter. Bottling up her emotions seems to come easy to Aditi. She loses her composure just once only to bounce right back as death closes in on Aisha.

The Sky Is Pink is as much about the emotional toll of nurturing a life that hangs by a tenuous thread as about a family that is determined not to retreat into a shell and wait fearfully for the inevitable. Death isn't the end. Nor is an impending tragedy a trigger for debilitating despair. Aditi and Niren's profound sense of grief and loss is played off against their brave reconciliation with their fate.

The first few shots of The Sky Is Pink establish the power of both absence and presence. Aisha is gone. A Labrador, a pet acquired not too long before her death and now an integral part of a family in mourning, lies sprawled on her empty bed. A painting of a colourful butterfly - a potent metaphor for the ephemerality of beauty - hangs on a wall, with Aisha's signature at the bottom of the frame.

In another bedroom, Aditi (Priyanka Chopra) and Niren (Farhan Akhtar), Aisha's parents, sleep with their backs to each other. The girl's demise has obviously created a void, but the aura of her presence - ironically rooted in her irreversible absence - is very strong around the house.

The narrative tone - animated and cheerful while being emotionally charged - is in sync with what the film is showcasing - a couple's stoic act of coming to terms with, and tiding over, a tragedy. It is a counterpoint to the funereal air that hangs over the family in the opening scenes and all through the couple's efforts to give their daughter the best available treatment. 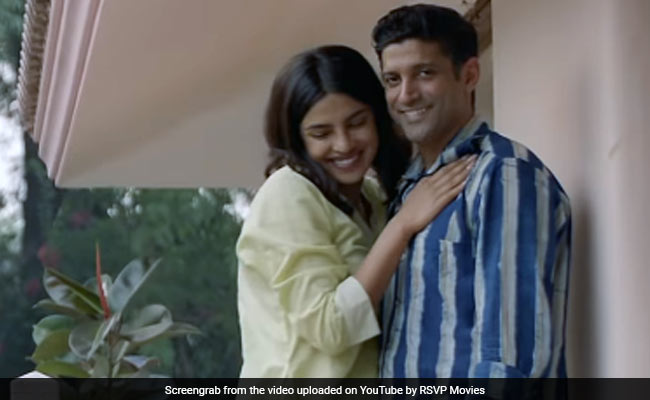 A still from The Sky Is Pink.

It is a tough ask because Aditi and Niren, who have already weathered the loss of their first-born, a girl with the same medical condition as Aisha's, do not have the means to fund a life-saving surgery in London. An appeal on a South Asian radio show helps them raise more than double the amount they need - money flowing in from Indians, Pakistanis, Bangladeshis, Afghans and others.

In a fleeting but defining moment, as Niren waits outside the Great Ormond Street Hospital, a London cabbie, unaware of the father's identity, hands him an envelope with a five pound-sterling note, a small contribution for the surgery. The generosity of strangers ensures that Aisha, unlike the sister she never saw, will have a fair shot at life.

After the transplant, the six-month-old is advised continued medical attention in the UK. For the sake of their daughter, Aditi and Niren are forced to live apart - the former by her daughter's side, the latter in Delhi to hold on to a corporate job. Flashbacks reveal the years of the couple's courtship across a sharp social divide - Aditi is from South Delhi, Niren from the Chandni Chowk - and, post-marriage, their futile effort to save their first child, Tanya.

In the first set of insights that Aisha provides into the surviving members of her family, she lets on that "19 years after two children their sex life was complicated". A child broaching her parents' "sex life" isn't the norm in Hindi cinema. Even as The Sky Is Pink drifts close to Bollywood conventions in other respects, it does things that aren't generally a part of the Hindi cinema game. Aditi sets up a date for Aisha with a schoolmate, gets her a canine companion and takes her on a snorkelling outing even as death stares the girl in the face.

When Aditi conceives her third baby, Niren, who now earns enough to afford a plush, sprawling Delhi abode with a swimming pool, suggests an abortion. Aware of the exceptionally rare genetic disorder that the couple has, he dreads the prospect of the birth of another child with severe combined immunodeficiency. Aditi, who has embraced Christianity following a mystical experience, refuses to terminate her pregnancy. They go ahead knowing the consequences.

If at all, The Sky Is Pink, scripted by Bose with Nilesh Maniyar, errs on the side of sustained cheeriness, enhanced appreciably by the presence of Chopra in the role of a mother who puts her career on hold and works determinedly to take care of Aisha.

Akhtar, cast as the sedate entrepreneur-father who stands by his wife like a rock despite occasional marital blips and toils away (off-screen) to pull his family out of middle-class want and into a corporate executive job-fuelled prosperity, provides the perfect foil to the poised Chopra. Rohit Saraf, playing Aisha's elder brother Ishaan, gives a solid account of himself.

The Sky Is Pink is of a hue that sets it apart from Bose's earlier films, but the director is acutely conscious of the colours she is working with here and uses the shades to deliver a pathos-filled but warm-hearted picture that does not lose sight of its primary purpose. Unmissable.