The Sky Is Pink: 'Let Him Suffer' - Priyanka Chopra, Farhan Akhtar Tease Each Other In BTS Video

"Playing Moose and Panda was as much fun on screen as it was off screen," wrote Priyanka Chopra 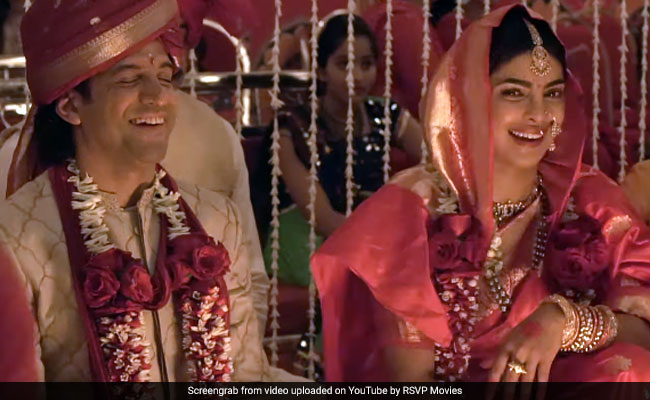 With The Sky Is Pink just days away from release, Priyanka Chopra revisited fond memories from the sets of the film in a behind-the-scenes video. "Playing Moose and Panda was as much fun on screen as it was off screen.... watching this behind the scenes reminded me just how much," Priyanka tweeted. The video is a kaleidoscopic montage of all the fun and emotional moments that went into making Shonali Bose's The Sky Is Pink. The film is based on late motivational speaker and author Aisha Chaudhary (played in the movie by Zaira Wasim), who was diagnosed with a terminal illness. Priyanka and Farhan Akhtar play Aisha's onscreen parents Aditi and Niren whose pet names are Moose and Panda, respectively.

The video begins with footage of Farhan carrying Priyanka piggyback for a scene when the director asks them to relax a few moments before the shot is ready. But Priyanka refuses to get off Farhan's back just to tease him and says: "It's okay let him suffer. He hasn't worked out in a long time. And I'm very light."

"What?" is all Farhan Akhtar could say.

The Sky Is Pink BTS video also offers a detailed insight into Priyanka and Farhan's characters, who represent a real-life couple, who dealt with the loss of their young daughter. "Moose and Panda. Aditi and Niren Chaudhary's names. I could never have come up with such crazy and interesting names. Moose for me was actually a very inspiring character to write. I wasn't quite sure like 'Are moose fierce?' Moose are the most gentle creatures but Aditi Chaudhary is a tigress," director Shonali Bose says in the video.

"I think she (Aisha) called her father Panda because Niren Chaudhary was a black belt and an expert in kung-fu. Panda to me is this really gentle and sweet... Like he gives the big hug and the big love and the big support. Such a close relationship with his daughter, with his son," she adds.

"They were very opposite in personality - Moose and Panda. And yet as a couple, they have this amazing chemistry and togetherness," Shonali Bose continues.

"I think, an ordinary couple being extraordinary is epic for me," Sonali Bose says in the video.

The Sky Is Pink premiered at the Toronto International Film Festival earlier this month and will arrive in theatres on October 11.