Priyanka wasn't the only one to school the journalist. In the comments thread, Peter Ford was advised to "Watch Barfi" and to Google the actress. 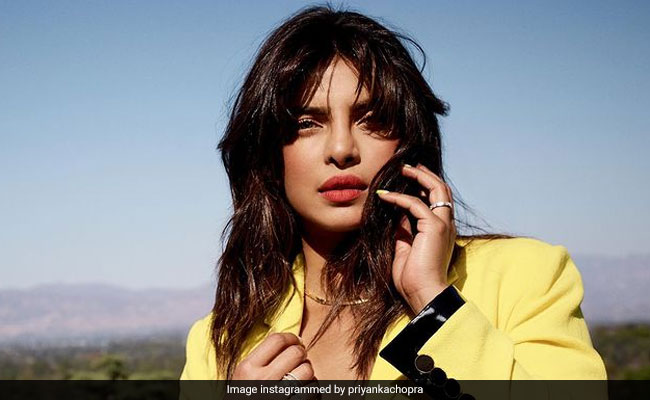 Priyanka Chopra, woman of too many hats to count, shut down an Australian entertainment journalist who asked in a tweet whether she and husband Nick Jonas were qualified to announce the nominations for the Oscars this year which they did on Monday. The 38-year-old actress, whose film The White Tiger is up for an Oscar, shared a run-through of her extensive film credits as listed on IMDb, tweeting: "Would love your thoughts on what qualifies someone. Here are my 60+ film credentials for your adept consideration." She was replying to Peter Ford, whose bio reads "The best & most widely heard entertainment reporter in Australia & NZ." In his tweet, Mr Ford wrote: "No disrespect to these two but I'm not sure their contribution to the movies qualifies them to be announcing Oscar nominees."

Would love your thoughts on what qualifies someone. Here are my 60+ film credentials for your adept consideration @mrpfordhttps://t.co/8TY2sw1dKbpic.twitter.com/T8DnQbtXZG

Priyanka wasn't the only one to school the journalist. In the comments thread, Peter Ford was advised to "Watch Barfi" and to Google the actress. He was also reminded in several responses that The White Tiger, which Priyanka stars in and serves as producer, has an Oscar nomination for Best Adapted Screenplay.

Nobody should need reminding that Priyanka Chopra is the star of any number of films at home, from blockbusters such as two movies in the Krrish franchise, Agneepath and Bajirao Mastani to acclaimed projects like The Sky Is Pink, Dil Dhadakne Do and Barfi! In addition, she is a producer and singer. Priyanka headlined the ABC series Quantico and starred in Dwayne Johnson's film version of iconic TV show Baywatch. She is a UNICEF Goodwill Ambassador to boot, an investor in dating app Bumble and just released a memoir titled Unfinished.

None of this appears to stop those unfamiliar with Priyanka Chopra's work from dissing her publicly. In 2018, The Cut ran an extraordinary takedown of the actress when she married singer Nick Jonas. The piece, which smacked of racism and misogyny, called Priyanka a "global scam artist" and insisted that Nick had been drawn into a "fraudulent relationship against his will." Faced with tremendous backlash, The Cut took the piece down and the writer tweeted this apology: "I want to sincerely apologise to Priyanka Chopra, Nick Jonas, and to the readers I offended and hurt with my words. I do not condone racism, xenophobia, or sexism. I take full responsibility for what I wrote, and I was wrong. I am truly sorry."

Then, as now, a simple Google search would have sufficed.

Priyanka Chopra's upcoming projects include the fourth Matrix movie and Text For You, which she recently completed filming in London.