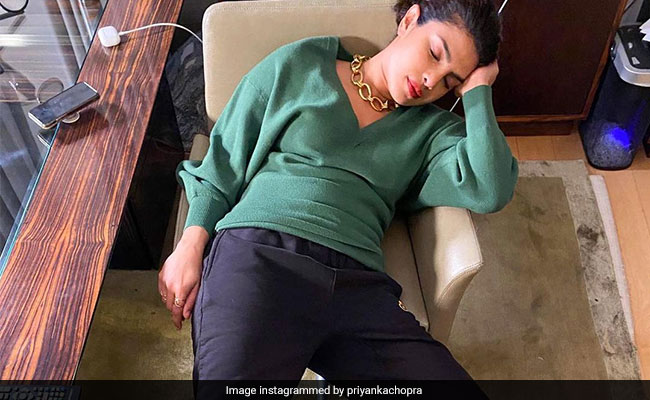 Priyanka Chopra is never not working. The 38-year-old actress is currently in London, where she was busy with the shooting schedule of Hollywood movie Text For You. While the shooting schedule of the film wrapped earlier this month, Priyanka's stay got extended owing to UK's third lockdown because of the spike in COVID-19 cases. Priyanka, who it appears was scheduled to fly back to Los Angeles, where she lives with her husband Nick Jonas, is now working from London. She's now occupied with the promotional duties of The White Tiger and the virtual launch of her memoir. In a recent Instagram post, Priyanka Chopra made an ROFL revelation about the secret behind her global domination. It's simple and easy - sleep. If you don't believe us, take a look at her photo, in which she can be seen dozing, half-seated on a chair. Priyanka is not her pyjamas because she needs to be Zoom ready at the same time. LOL.

"What's my secret to doing late night talk show appearances in the US while living in London you ask?" Priyanka captioned her post. Priyanka Chopra, who often shares details of her Zoom meeting looks (top half formal, bottom half casual), can be seen wearing comfy loafers in the photo.

Earlier, Priyanka captioned an Instagram story with these words: "Zoom life. Business on top and the bottom... well... you know," in which she can be seen chilling around in a pair of flip flops paired with a satin shirt and black pants.

When work-from-home became the new normal, Priyanka Chopra, who is just like us, didn't hesitate to wear a pair of sweatpants to a virtual meeting. She shared her "Zoom lewk" in an ROFL Instagram post and we also couldn't help but notice those flip flops.

Priyanka Chopra recently found herself in a midst of a controversy over an alleged breach of lockdown in London but her spokesperson denied such speculation in a lengthy statement. Meanwhile, Priyanka's The White Tiger premieres on Netflix today. In the film, Priyanka Chopra co-stars with Rajkummar Rao and Adarsh Gourav, who plays the protagonist. Priyanka also just had a new release in We Can Be Heroes.