"Congratulations and thank you to the entire cast and crew," Priyanka Chopra wrote in her post 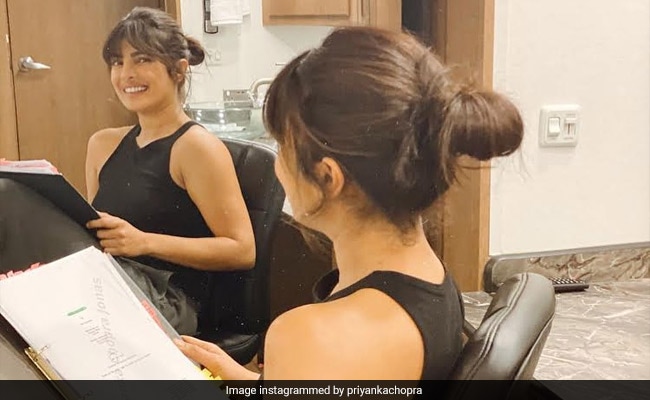 Priyanka Chopra, recently involved in a controversy over an alleged breach of lockdown rules in London, has rapped the film she was shooting in the UK capital. The 38-year-old actress was filming her new project Text For You, co-starring Sam Heughan and Celine Dion. "That's a wrap! Congratulations and thank you to the entire cast and crew. See you at the movies," she wrote in her post. Priyanka shared a picture of herself dressed casually and laughing into a mirror, holding a copy of what is presumably the script of the film. See Priyanka Chopra's post here:

She also shared this picture from the "last day on set":

Last week, Priyanka Chopra's spokesperson denied that she had broken UK's strict lockdown after being photographed at a salon in London. Police were reportedly called and issued a verbal warning. Speaking to Mirror.co.uk, Priyanka's rep said that she had been at the salon to have her hair coloured for film work and had not breached rules. Priyanka had been pictured at the Josh Wood salon in Notting Hill.

Priyanka's rep told Mirror.co.uk: "Following government guidance, Priyanka's hair was coloured for the purpose of the film she is currently shooting in London. The salon was opened privately for the production and everyone involved had been tested and followed both the DCMS working guidelines and the film production regulations. As I am sure you are aware, Film and TV production is permitted to continue in the UK, and locations can continue to accommodate shoots and recces that are carried out in-line with government guidelines. The exemption paperwork legally permitting here to be there was provided to the police, and they left satisfied."

Priyanka Chopra posted this last month about shooting in COVID times. "What shooting a movie looks like in 2020. Daily testing, face shields, and masks on hand. This was taken after hair and makeup where we wait right before we shoot, in a secure distanced zone ...And masks on...in between all shots," she wrote. Priyanka's husband Nick Jonas has been in London with her.

Priyanka Chopra just had a new release in We Can Be Heroes - a sequel to which has been announced - and another coming up in The White Tiger. The super-bust star has a full slate ahead, which includes a comedy with Mindy Kaling.