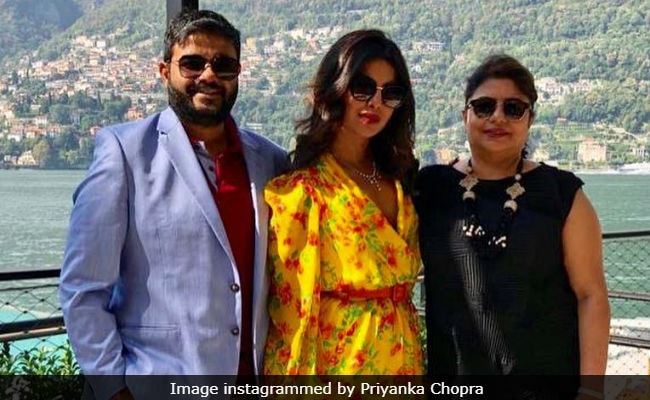 Priyanka Chopra was 'Miss Sunshine' in Italy as she toured the country along with her mother Madhu Chopra and brother Siddharth. After attending Isha Ambani and Anand Parimal's pre-engagement party over the weekend with her fiancé Nick Jonas, Priyanka strolled around the picturesque country but we did not spot Nick in the latest set of pictures shared by Priyanka on Instagram. Nick and Priyanka attended the Ambani bash at Lake Como together, complementing each other in Manish Malhotra's designs but more about that later. We did not spot Priyanka at Isha Ambani's engagement party on Sunday and going by the latest pictures it seems she used one day to walk around the countryside with her mother and brother.

Priyanka looked stunning in a bright Caroline Constas dress, which she accessorised with red pumps and a yellow handbag.

Check out photos of Priyanka, Madhu Chopra and Siddharth in Italy:

Over the weekend, Priyanka Chopra made a dazzling appearance at the Ambani bash with Nick Jonas. Priyanka wore a stunning beige saree with threadwork detail while Nick complemented her in a black sherwani, which he wore with an off-white kurta.

Here are pictures of Priyanka and Nick with Manish Malhotra from the party venue.

On the work front, Priyanka Chopra is currently busy with Shonali Bose's The Sky Is Pink, co-starring Farhan Akhtar and Zaira Wasim. She completed one schedule of the film in India recently. She had also reportedly signed up for Cowboy Ninja Viking opposite Chris Pratt. However, the project has been postponed indefinitely.