Priyanka Chopra and Nick Jonas - can these two get any more adorable together? 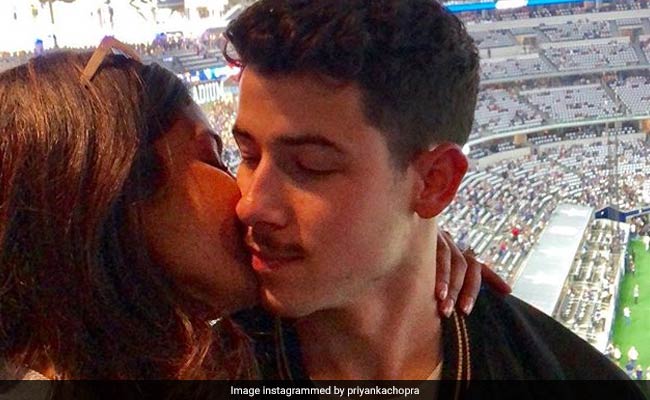 Priyanka Chopra and Nick Jonas - can these two get any more adorable together? Priyanka had the sweetest birthday post for fiance Nick Jonas, who turned 26 on Sunday. Priyanka, who is with Nick in California currently, shared a photo on Instagram in which she can be seen affectionately kissing him. She captioned the photo: "Happy Birthday baby." Nick Jonas responded to the post with heart emoticons. Within few hours the photo shared by Priyanka has over 10 lakh likes. The loved-up photo shared by Priyanka has comments like: "Omg I can't handle this sweetness," "Cutest couple," and "Love this couple," and we can't agree more. The duo rang in the birthday celebrations with friends and family in California. Priyanka had shared a group photo, which also featured Nick's brother Joe Jonas.

Earlier, Priyanka and Nick were holidaying in Mexico. Pictures of the couple arriving in Cabo San Lucas were circulated on the Internet by fan clubs.

After the couple's Mexican holiday, the couple was spotted at the US Open tournament. Joining them were Nick's brother Joe, his actress girlfriend Sophie Turner and Priyanka's mother Madhu Chopra.

Priyanka Chopra 36, and Nick Jonas, 25, confirmed their engagement in Mumbai last month with an intimate roka ceremony and a party afterwards. Several reports suggest that Nick had proposed to Priyanka in London in July, where the couple celebrated the actress' 36th birthday.

On the work front, Priyanka Chopra has Sky Is Pink, A Kid Like Jake and Isn't It Romantic? in the line-up.