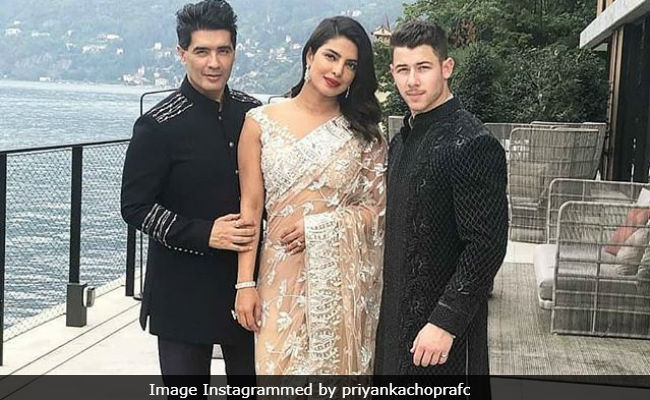 Lake Como in Italy is currently crowded with a galaxy of Bollywood stars, all dressed up for what is reportedly Isha Ambani's official engagement to fiance Anand Piramal. None of the stars whose pictures are available on social media have confirmed they are in Italy for the engagement - indeed, there is no actual confirmation that there is an engagement at all. But everyone is certainly dressed the part - Priyanka Chopra and fiance Nick Jonas posed for a picture with designer Manish Malhotra, whose creations they were wearing. Sonam Kapoor posted a picture of herself and husband Anand Ahuja on a boat, both in traditional regalia. Her father Anil Kapoor posted a solo photo of himself in a tux; Sonam's cousin Janhvi Kapoor picked a gown over an ethnic outfit. Juhi Chawla alluded to a 'special occasion' in her caption. Here are the pictures from Lake Como available so far:

Here are all pictures so far:

"One of the first conditions of happiness is that the link between man and nature shall not be broken." - Leo Tolstoy

Isha Ambani and fiance Anand Piramal will reportedly exchange rings, formalising their engagement. Anand, whose father Ajay Piramal is the chairman of the Piramal Group of companies, is believed to have proposed to Isha at a temple in Mahabaleshwar in May.

No details of this weekend's festivities have been officially revealed. Speculation suggests that the guest list at Lake Como also includes Shah Rukh Khan, Aamir Khan, Karan Johar, Alia Bhatt and other stars. The Ambanis - Isha and parents Mukesh and Nita Ambani - attended the intimate post-engagement party that Priyanka and Nick hosted in Mumbai last month after their roka. Priyanka and Nick also attended a party to celebrate the engagement of Isha's brother Akash Ambani and his fiancee Shloka Mehta in June.