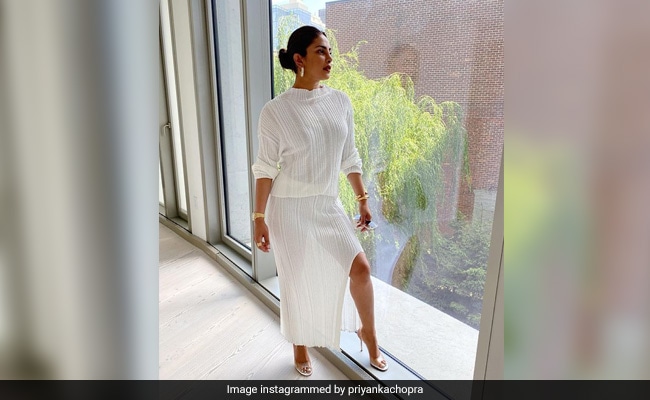 Priyanka Chopra is a true diva and proof of that is her latest Instagram entry. The 38-year-old actress, on Monday, dropped three new pictures of herself on the photo-sharing platform. Through the pictures, the actress gave us a glimpse of her Pride outfit for the LGBTQ+ Pride March that is taking place in the New York City right now. In contrast to the LGBTQ+ community's rainbow theme, Priyanka Chopra picked out an all-white outfit for the day. In the picture that she shared, Priyanka can be seen dressed in a white full-sleeved blouse that she paired with a matching side slit skirt. She completed her look with gold accessories which include a watch, hoop earrings and bangles. Sharing the pictures on Instagram, Priyanka Chopra wrote: "Sunday's OOTD. Feeling the love in NYC... Happy Pride." At the end of the caption, Priyanka revealed that the pictures have been clicked by her manager Anjula Acharia.

Take a look at the pictures here :

Earlier this year, Priyanka marked the opening of her restaurant with a special Instagram post. In the caption of the post, she shared that it was her husband, singer Nick Jonas, who suggested naming her restaurant Sona.

The actress recently returned to New York. She had been busy with the shoot of Russo Brothers' upcoming drama series Citadel in London. Besides that, she also has other projects like Matrix 4 and Text For You lined up for her.