Priyanka Chopra Is Crushing On Her "Amazing" Los Angeles Villa. Fancy A Tour?

Only if we could live in Priyanka Chopra's house rent free! 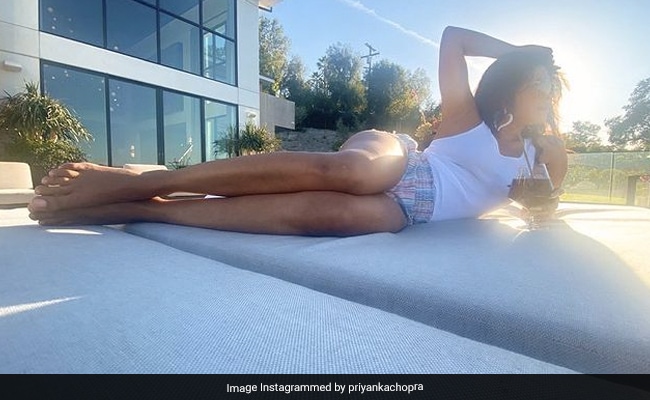 That is one fabulous house - Priyanka Chopra thinks so too. It's hers after all. The 38-year-old star just told us that there are glimpses of her Los Angeles home in a promotional video shared by Nick Jonas. "So awesome," Priyanka wrote for Nick and added: "Also our house looks amazing! You look amazing too baby." Priyanka's comment made us re-watch the video and it's actually a tour of Priyanka and Nick's Los Angeles villa. Priyanka's house comes with a swanky infinity pool, a sun-kissed porch, an in built gym, a recording studio and minimally modern interiors in shades of white and grey. The outdoor area with a cozy seating arrangement is our personal favourite.

The advert featuring Nick Jonas has been filmed at the Los Angeles home. Take a look at it here.

It so happened, Priyanka Chopra also shared this photo of her sun-bathing at home just hours ago. She summed up her mood in these words: "Sun, sangria and sass." Only if we could live in Priyanka Chopra's house rent free.

Priyanka Chopra also has swanky apartment in New York, where she lived before marrying Nick Jonas. Priyanka also has a home in London, where she spent months in the recent past because of work commitments.

Apart from being an international star, Priyanka Chopra sports many hats. She made her writing debut with the memoire Unfinished, is a tech-investor and also counts as a UNICEF Goodwill Ambassador. She recently started a hair care brand called Anomaly Haircare. Priyanka Chopra also runs the production house Purple Pebble Pictures, which aims to promote regional cinema. Priyanka also had a career as a singer and recently opened her restaurant Sona in New York.