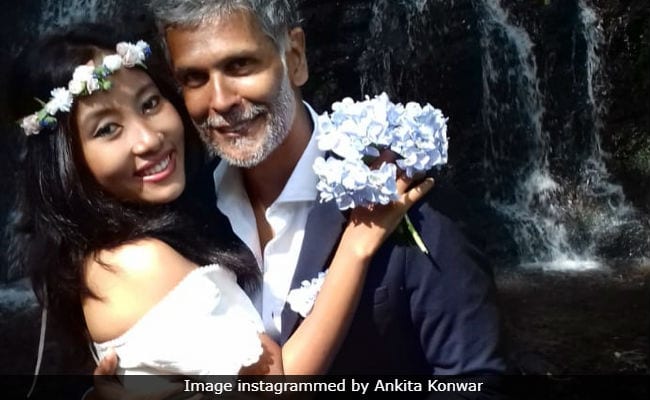 Milind Soman and Ankita Konwar exchanged wedding vows once again in Spain in a barefoot wedding after getting married in April as per Maharashtrian tradition. Ankita instagrammed pictures from their dreamy wedding in the woods with a serene waterfall in the backdrop. Ankita wore a white dress with a matching flower-made tiara and bouquet. Milind Soman wore a white suit with blue blazer complementing Ankita to the T. "The barefoot wedding we always wanted in the woods with the beautiful family," Ankita captioned the post, which received several cute comments. "Couple from haven," wrote one Instagram user while another Internet user said: "Wow... you guys are just amazing... congratulations on the wedding from your bucket list."

Ankita Konwar, 27, and Milind Soman, 52, got married in Alibaug on April 22 as per Maharashtrian customs. At that time, Ankita blended her Assamese heritage in the Maharashtrian style for the wedding outfits. She accessorised pieces of jewellery in Assamese design with a simple white saree during the wedding ceremony while she wore a traditional mekhla chador in one of the pre-wedding functions.

Ankita Konwar and Milind Soman travelled extensively after getting married. They went to Hawaii for their honeymoon and later filled pages of their Insta-vacation diaries with photos from European countries. Spain, where they concluded their second wedding ceremony, is their latest travel destination.

Milind Soman is best known for featuring in the video of Alisha Chinoy's Made In India. He has starred in films like Rules: Pyaar Ka Superhit Formula, 16 December and Bajirao Mastani, which was also his last film. On television, he was last seen as judge on reality show India's Next Top Model.