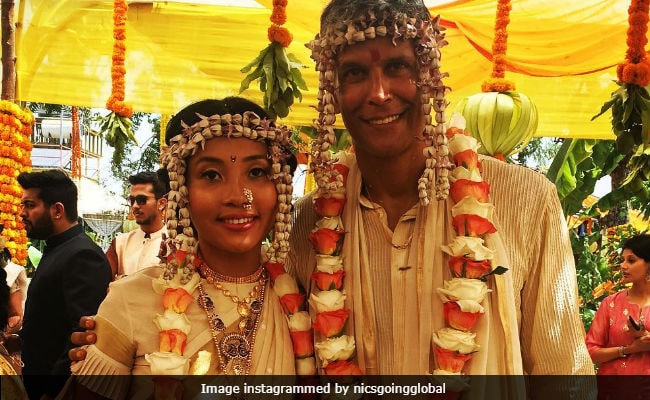 New Delhi: Milind Soman and Ankita Konwar are now married. The couple opted for a traditional Maharashtrian wedding in Alibaug in the presence of their family and friends on Sunday morning. Both Milind Soman and Ankita Konwar were color coordinated in white and looked absolutely adorable. Anikta, 27, opted for minimal make-up and statement jewellery to go with her white saree and she looked stunning. The pre-wedding celebrations, which included a mehendi function, a haldi ceremony and asangeet were held in Alibaug on Saturday. Their friends shared several photos from the festivities on social media and the remaining were shared by fan clubs.

and it's done.... They are Married... These 5 days were not less then any adventure trip... A lifetime experience.. Wish u both Milind and Ankita a happy married life. Stay Healthy and Happy.. God Bless you both... . . Mere Yaar Ki Shaadi hai... . . #weddingbells #weddingday #shadikaladoo #milindrunning #destinationwedding #Alibag #friendsforever

Here are some photos of the pretty bride, before she arrived at the mandap:

And here's a relative giving some final touches to the groom's outfit:

Here are some photos from the pre-wedding ceremonies shared by Milind's colleagues Abhishek Asha Mishra, Dipannita Sharma and Nicola Fenton:

Promoted
Listen to the latest songs, only on JioSaavn.com
Milind Soman and Ankita Konwar dated for four years before they decided to get married. Reports of their wedding have featured in headlines all of April. A source told Times of India and Milind and Anikta did not want their wedding to be a "huge affair."

Milind Soman is best-known for starring in the music video of Alisha Chinai's Made In India. He has also featured in films such as 16 December and Rules: Pyaar Ka Superhit Formula. He was last seen in Bajirao Mastani. Both Milind and Ankita are also marathon runners.