Pic: The One With Kareena-Karisma Kapoor, Malaika-Amrita Arora And Their Pouts

If we had to describe friendship goals in a picture, this would be it 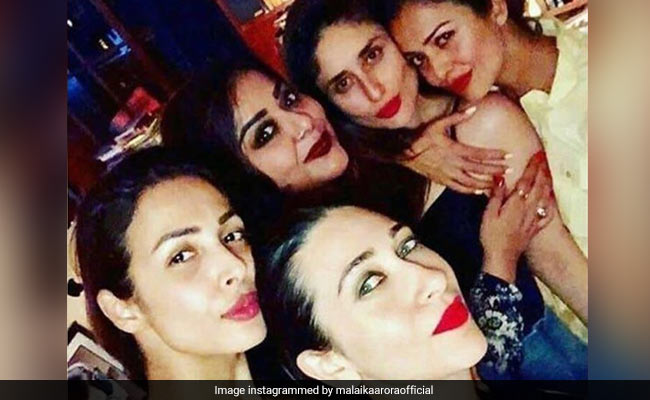 Malaika Arora's latest Instagram post perfectly encapsulates the essence of her friendship with Kareena Kapoor, Karisma Kapoor and Mallika Bhatt. On Wednesday morning, Malaika posted a picture with her friends, which also features her sister and actress Amrita Arora. In the picture, all the stars can be seen pouting as they pose for the camera. Malaika chose the best set of words to describe the photograph and she wrote: "Friends that pout together stay forever." She added the hashtags #Majormissing and #Majorlove. Later, Kareena shared the same picture on her Instagram profile and she wrote: "Forever us."

Karisma and Kareena Kapoor, Malaika and Amrita Arora are a part of a close-knit circle which also includes designer Manish Malhotra. During the lockdown, the quartet frequently shared throwback pictures and united through video calls. Kareena shared this picture with her BFFS and wrote: "We've gone from a table for 4 to 4 different tables. Can't deal with being away from my girl gang for this long."

During the lockdown, Kareena shared this and wrote: "Friends that nap together, stay forever."

Malaika Arora was last seen as one of the judges on the TV reality show MTV Supermodel Of The Year, alongside Milind Soman and designer Masaba Gupta.