Anupam Kher is celebrating his birthday in "pawri" style 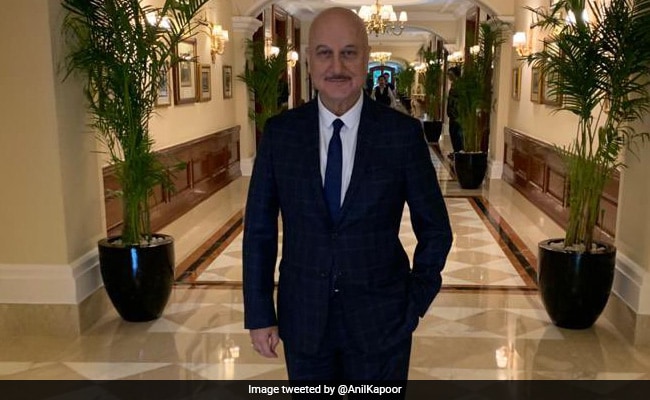 Anupam Kher is celebrating his 66th birthday in "pawri" style and on his special day, his best friend and neighbour of his Mumbai residence, actor Anil Kapoor, greeted him with the sweetest wish on social media. Anil made sure to wish his best friend in style and he did so by posting a picture of the birthday boy on social media. You know what is so special about the picture? It was clicked by none other than Anil Kapoor and he, therefore, gave the "Photo courtesy" to himself while posting the picture on social media. In the picture, Anupam Kher looks like a dapper dressed in a black suit.

Besides Anil, Anupam Kher's Special 26 co-star and close friend Akshay Kumar also wished him on the occasion and posted a picture with him on Twitter. In the picture, Akshay holds Anupam from his shoulder as they lean in for a friendly hug. "Dear Anupam Kher, have the happiest birthday. Am shooting here in Mumbai even on a Sunday...hope you're having a relaxed day in some cooler climes. Catch up soon. Love and prayers," Akshay Kumar wrote in the caption of the post.

Actors Riteish Deshmukh and Tiger Shroff also made sure that they extend their sweet greetings to the veteran actor. While Riteish accompanied his birthday wish for Anupam Kher with a solo picture of him, Tiger Shroff only posted the greeting on Twitter. "Happy Birthday my favourite.... keep inspiring us with your work on screen and off screen. Love you - Jai Ho, Anupam Kher," wrote Riteish Deshmukh.

"Happy birthday sir Anupam Kher! Wish you the best of health and happiness always lots of love," tweeted Tiger Shroff wishing Anupam Kher on his birthday. Earlier in the day, Anupam Kher posted a video on Instagram, sharing that he is celebrating his birthday in the much trending "pawri" style.

Anupam Kher can be seen introducing some underprivileged children as his friends in the video before announcing that they are having a "pawri" on his birthday. Several fans of the actor flooded his Instagram comments section wishing him on the special occasion.