Nothing Much, Just Another Cute Video Of Karan Johar's Twins Yash And Roohi 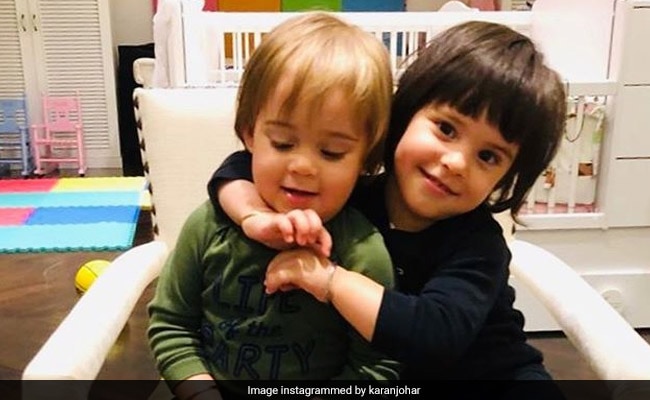 Karan Johar playing peek-a-boo with his twins Yash and Roohi is the cutest thing you will see on the Internet today. Karan recently posted a million dollar video of his little munchkins on Instagram, where they can be seen playing peek-a-boo with their papa. Roohi and Yash's expressions in the video are simply priceless. "Morning shenanigans," Karan Johar wrote and added hashtags "#roohiandyash" and "#mylovestory". The video has over 403,425 views in less than five hours and has been liked by Shweta Bachchan, Sidharth Malhotra, Shraddha Kapoor, Abhishek Bachchan, Neha Dhupia, Kiara Advani, Ananya Panday and others. Twinkle Khanna and Malaika Arora have commented on the video. "Just too cute," read Malaika's comment on the video.

Karan Johar, who continually shares photos and videos of his munchkins on Instagram, delighted followers with an adorable video of his kids on Children's Day. "Please see the dancing the driving skills," Karan captioned the video. Cute can't even begin to describe the video featuring Yash and Roohi, who appear to be in a playful mood.

Karan Johar welcomed twins Roohi and Yash via surrogacy in February last year. "When I saw them for the first time, I didn't realise there were tears rolling down. I couldn't believe they were two big pieces of me who are staring at me, who are innocent, vulnerable. It was the most surreal overwhelming emotion I have ever experienced," Karan Johar earlier told news agency PTI.