'Not Cool:' The Internet Schools Nick Jonas For Smoking Cigar 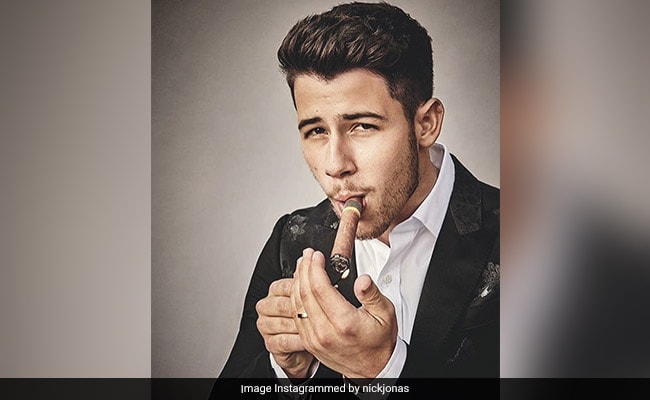 Nick Jonas found himself on the receiving end of brutal criticism from his fans after he shared a picture of himself smoking a cigar on his Instagram profile, on Wednesday. The 26-year-old singer, who happens to be on the cover boy the September issue of the American magazine Cigar Aficionado, shared a picture of himself smoking a cigar, which did not go well too well with his fans. BTW, did we mention that Nick, also happens to be the the first celebrity under the age of 30 to be on the cover of the magazine. Nick's fans decided to school him about the negative aspects of smoking and flooded the comments section. Out of sheer concern for the singer, a fan on Instagram wrote: "I love Nick Jonas but there is nothing cool about smoking." Another Instagram user wrote: "Love you, but hate the cancer stick." Several fans reminded the singer that he is a diabetes patient and that he should refrain from smoking for that very reason. "No, Nick, you have diabetes," read a comment on the post. Criticism aside, Nick Jonas' wife Priyanka Chopra also left a comment on the post. She wrote: "Yummy."

This is not the first time that the Internet has criticised a star for smoking. Earlier this year, Nick Jonas' wife Priyanka Chopra, who was photographed smoking during a vacation, pictures from which went insanely viral on social media. Several fans reminded actress of the inhaler commercial, in which she opened up about being diagnosed with asthma.

Nick Jonas recently launched his Tequila brand Villa One along with designer John Varvatos. Priyanka Chopra, who attended the launch party with Nick, congratulated the singer and she wrote: "So proud. When you own your own tequila at 27!"

On the work front, Nick Jonas will be seen playing the role of World War II gunner Bruno P Gaido in Midway. He will also be seen in Jumanji: The Next Level. Meanwhile, Priyanka Chopra is currently at the Toronto Film Festival, where her film The Sky Is Pink will premiere on September 13.