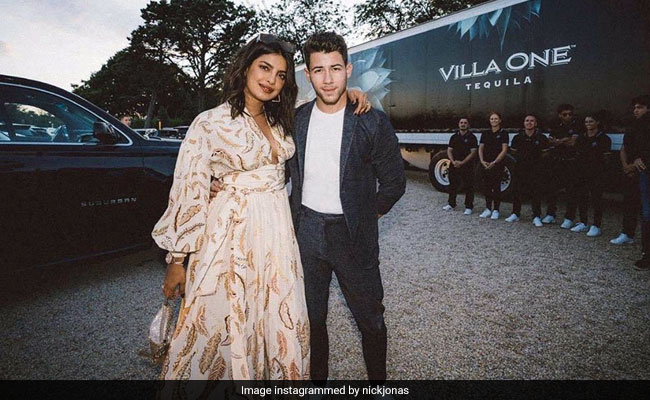 It's so good to see Priyanka Chopra and Nick Jonas together. Priyanka, who couldn't make it to the MTV Video Music Awards last month (more on that later), accompanied Nick Jonas to the launch party of his tequila brand Villa One. On Monday morning, the 26-year-old singer shared an adorable picture of himself along with his wife on his Instagram profile from Villa One party in Montauk, New York. In the picture, Priyanka could be seen dressed in flared printed dress, while Nick could be seen wearing a white t-shirt, which he paired with black trousers and a matching blazer. Nick Jonas added the hashtag #LifeAsItShouldBe to his post, which also happens to be the tagline of the brand.

Nick Jonas launched his tequila brand Villa One along with designer John Varvatos recently. Nick's brother Joe Jonas congratulated the singer for his new venture. He shared pictures from the launch party and wrote: "Congrats Nick Jonas and John Varvatos! Here's to Villa One."

Priyanka Chopra trended incessantly last week after she shared an edited version of a photograph from the MTV Video Music Awards, where the Jonas Brothers had won the best pop song for their single Sucker. In the picture, Joe Jonas and Kevin Jonas could be seen kissing their respective partners Sophie Turner and Danielle Jonas while Nick could be seen smiling by himself. Priyanka placed herself next to Nick in the picture and she wrote: "I'm always with you Nick Jonas. Congratulations Jonas Brothers! I'm so proud of all of you!"

Priyanka Chopra and Nick Jonas got married in Jodhpur's Umaid Bhawan Palace in December last year, where they had Hindu and Christian wedding ceremonies. Priyanka Chopra will next be seen in The Sky Is Pink.

Yaara Movie Review: Vidyut Jammwal's Action Film Has Its Moments - But Too Few And Far Apart