How Priyanka Chopra Photoshopped Herself To Be With Nick Jonas 'Always' 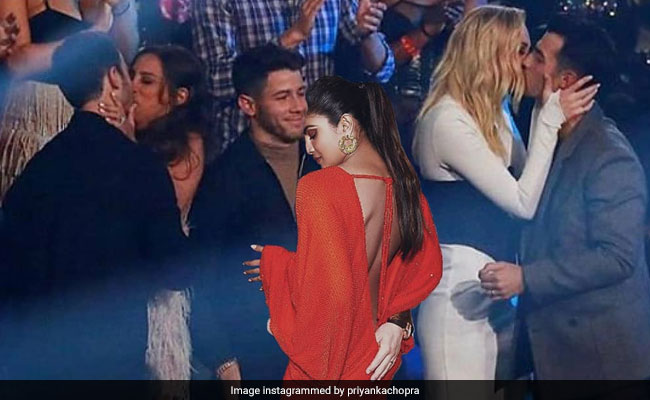 Nick Jonas is extremely lucky. Why, you ask? Well, Nick's wife Priyanka Chopra did the sweetest thing for him. Recently, a photograph from the MTV Video Music Awards, where the Jonas Brothers won the best pop song for their new single Sucker, went viral on social media. In the picture, Joe Jonas and Kevin Jonas could be seen kissing their respective partners Sophie Turner and Danielle Jonas while Nick could be seen smiling by himself and we could clearly tell how much he was missing Priyanka, who couldn't make it to the event. But thanks to Photoshop, Priyanka Chopra found a way to be close to her husband. The actress shared a modified version of the photograph, in which she can be seen hugging Nick. Now, isn't that smart?

Priyanka Chopra stole our hearts with this adorable gesture and she captioned the post: "I'm always with you Nick Jonas. Congratulations Jonas Brothers! I'm so proud of all of you!" Take a look at Priyanka Chopra's post here:

ICYMI, this is the original picture, (sans Priyanka Chopra):

Priyanka Chopra and Nick Jonas' social media PDA is just adorable and these pictures from the couple's Miami vacation prove that. Take a look at the pictures here:

Priyanka Chopra and Nick Jonas got married in Jodhpur's Umaid Bhawan Palace in December last year. The couple exchanged wedding vows in a Christian ceremony and they later had a Hindu ceremony. The couple hosted several wedding receptions later.

Priyanka Chopra will soon feature in director Robert Rodriguez's Netflix film We Can Be Heroes, which will be a superhero movie. She also has Shonali Bose's The Sky Is Pink, co-starring Farhan Akhtar and Zaira Wasim in the pipeline.