Priyanka Chopra, Set For The Toronto Film Festival, Shares An Update On The Sky Is Pink

"So excited for the amazing early reviews and to share this with the world," wrote Priyanka Chopra 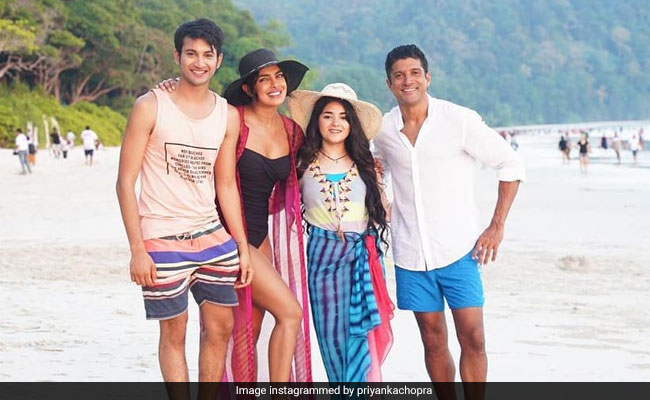 Priyanka Chopra can't keep calm. Why, you ask? Well, the actress' forthcoming film The Sky Is Pink is all set to premiere at the Toronto Film Festival on September 13. On Saturday, the 37-year-old actress posted an adorable picture of herself along with her film's cast. In the picture, Priyanka can be seen happily posing with Farhan Akhtar, Zaira Wasim and Rohit Saraf on a beach. In her post, Priyanka also revealed that she is on her way to TIFF (Toronto International Film Festival) as it is popularly called). The caption on Priyanka's post read, "On my way to TIFF today. Can't wait for the rest of the team to join me for the premiere on September 13. So excited for the amazing early reviews and to share this with the world."

Meanwhile, the film's lead actor Farhan Akhtar posted a picture with his co-star Priyanka and he wrote: "The Sky Is Pink was made with not just hard work but with a lot of love and it is overwhelming to receive so much love and appreciation at TIFF. Trailer will be out soon, guys! Stay tuned."

The Sky Is Pink went on floors last year and it has been shot across a variety of locations. However, the major sections of the film have been shot in Mumbai, Delhi and London. The film has been directed by Shonali Bose and it will jointly be produced by Priyanka Chopra and Roy Kapur films.

The film will showcase the story of late motivational speaker and author Aisha Chaudhary, who was diagnosed with a terminal illness. Speaking of her association with the project, Priyanka Chopra earlier said, "The Sky Is Pink is a story that I connected with from the minute I heard it and in Shonali's hands, it's been crafted into a moving, beautiful film that will renew our faith in love and life. It's what led me to not only take on the challenging role of Aditi Chaudhary but also to co-produce it."