Namrata Shirodkar Posts A Pic Of Mahesh Babu Goofing Around With Kids Gautham And Sitara: "Three Of A Kind"

"These two have their own equation, while this middle person has her own mind," wrote Namrata 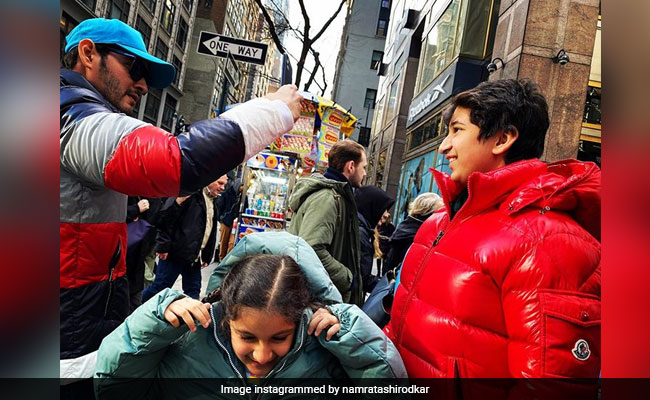 Namrata Shirodkar's latest Instagram entry featuring actor husband Mahesh Babu and kids Gautham and Sitara will cheer you up instantly. On Tuesday, the former beauty queen shared a throwback picture from her family vacation on her Instagram profile and called Mahesh Babu, Gautham and Sitara "three of a kind" in her caption. In the picture, the father-son duo can be seen sharing a light moment while Sitara can be seen goofing around with them. Sharing the photo, Namrata wrote: "These two have their own equation, while this middle person has her own mind. Three of a kind" and added: "Where does that leave me?"

We called Namrata's latest post a throwback picture because the actress previously shared similar pictures from their New York vacation, where they were last holidaying to celebrate the success of Mahesh Babu's super hit Sarileru Neekevvaru (more on that later).

First, take a look at the aforementioned post here:

Now, check out the other pictures from Mahesh Babu and Namrata Shirodkar's New York vacation:

Memories that last forever Take me back to NYC #TBT

Some quality time out #streetsofnewyork #familytime

The baby in her has grown up #traveltheworld #jetsetter enroute newyork

Namrata, who was crowned as the Miss India in 1993, met Mahesh Babu on the sets of the 2005 film Vamsi and got married to him the same year. On the work front, Sarileru Neekevvaru is Mahesh Babu's fourth consecutive hit after the 2019 film Maharshi, the 2018 film Bharat Ane Nenu and the 2017 film SPYder. Directed by Anil Ravipudi, Sarileru Neekevvaru also featured Rashmika Mandanna, Vijayashanti, Prakash Raj, Rajendra Prasad, Vennela Kishore and Murali Sharma. Mahesh Babu will next be seen in a Parasuram-directed film.