Here's how Namrata Shirodkar is celebrating the success of Maharshi 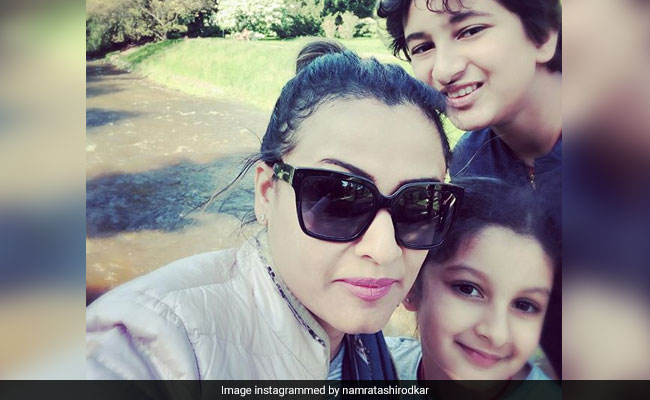 Mahesh Babu's Maharshi is doing great at India's box office and the actor's family is celebrating the huge success of the film in their own style. Mahesh Babu's wife Namrata Shirodkar recently shared an adorable photo from her ongoing vacation on social media, in which her kids Sitara and Gautham can be seen "faffing around" with smiles on their faces. She accompanied the post with the hashtag "#CelebratingMaharshi." Mahesh Babu is holidaying with his family and the actor and his wife keep on posting photos from their vacation. However, none of them disclosed the destination in any of their posts. But first, take a look at Namrata Shirodkar's lovely photo:

In a separate post, Namrata Shirodkar shared her happiness and excitement over the success of her husband's film Maharshi. Sharing a poster of the film, which stated that the film crossed Rs 175 crore at box office, Namrata wrote: "Fastest 175 and counting!! That's a sixer hit out of the park!! Just awesome!!! Too, too happy!!!"

Fastest 175 & counting !! That's a sixer hit out of the park !! Just AWESOME!!!! Too, too happyyyyy!!! #EpicBlockbuster #CelebratingMaharshi

In her previous posts, Namrata Shirodkar shared several photos from the family vacation. Take a look:

Mahesh Babu called his holiday a "special" one dedicated to the success of Maharshi. Even before leaving for the vacation, he shared a picture along with his family from the airport and wrote: "Off to another memorable holiday... This one is special... Celebrating Maharshi."

Off to another memorable holiday... This one is special... #CelebratingMaharshi

For those who don't know, Mahesh Babu and Namrata Shirodkar met on the sets of the 2005 film Vamsi and they got married the same year.

Maharshi is Mahesh Babu's third consecutive hit after the 2017 film SPYder and Bharat Ane Nenu, which released in 2018. The Vamshi Paidipally-directed film also featured Pooja Hegde in a pivotal role.