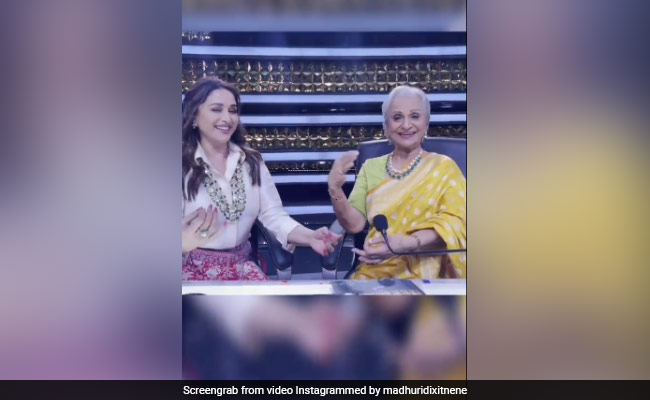 Madhuri Dixit and Waheeda Rehman in a still from the video. (courtesy: madhuridixitnene)

Madhuri Dixit, who features as one of the judges on the TV reality show Dance Deewane, frequently shares pictures of herself along with the guests on the show on her Instagram profile. On Tuesday evening, Madhuri shared a video on Instagram, in which she can be seen performing to the song Pan Khaye Saiyan Hamaro along with veteran actress Waheeda Rehman, who also featured in the original track, sung by Asha Bhosle. In the video, Madhuri can be seen dressed in a white shirt and an embroidered skirt. Waheeda Rehman looks graceful in a yellow saree. Both the actresses look beautiful as they dance together in the video.

Madhuri Dixit, who completed 36 years in Bollywood, last year, will soon be making her debut in the digital world with Netflix's upcoming series, which will be produced by Karan Johar. The actress has previously collaborated with Netflix for a Marathi drama titled 15th August, which was her debut project as a producer. In terms of films, she was last seen in the 2019 period drama Kalank, co-starring Alia Bhatt, Sanjay Dutt, Aditya Roy Kapur and Sonakshi Sinha. During the lockdown last year, she released her first single titled Candle.