"...Just remember that with freedom comes responsibilities. From today the world is yours to enjoy, protect and brighten," wrote Madhuri Dixit 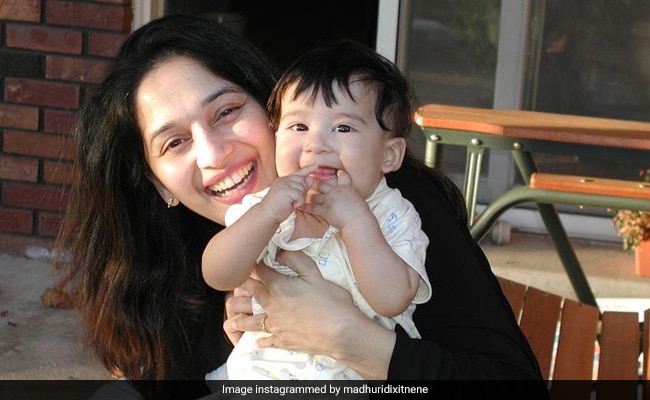 "My baby is officially an adult," said Madhuri Dixit as her elder son Arin turned 18 on Wednesday. Madhuri posted a few pictures of herself with Arin on Instagram to wish him a happy birthday. While the first photo is a childhood memory of Arin with his mom, the second one is a boomerang of two pictures featuring both of them, which was made years later, probably on his 18th birthday today. In the first picture, Madhuri can be seen holding the little munchkin Arin in her arms. The second one is an adorable memory of Madhuri and Arin as the mother-son duo bond with each other.

Proud Madhuri wrote an empowering caption for her son Arin along with the pictures. She wrote, "My baby is officially an adult. Happy 18th birthday, Arin. Just remember that with freedom comes responsibilities. From today the world is yours to enjoy, protect and brighten. Make good on all the opportunities that come your way and live life to the fullest. Hope your journey is an unforgettable adventure. Love you."

Madhuri's husband Sriram Nene also wished his son Arin a happy birthday. Sriram posted a montage of his old pictures with Arin on Instagram. The video shows how Madhuri and Sriram's son Arin has "grown into a handsome and talented young man" at the age of 18. Sriram wrote in his caption, "Arin's 18th Birthday. Wanted to wish Arin, my mini-me, a very happy 18th birthday and many happy returns of the day. Have watched you grow and develop into the handsome and talented young man that you are today. Am amazed at how you care about everyone and everything and show grace in all things. We see a bright future for you, as you venture into the world as an adult, and add much to all of our lives, together. With much love, Dad."

Actress Madhuri Dixit married Sriram Nene, a cardiovascular surgeon on October 17, 1999. Madhuri gave birth to Arin on March 17, 2003. The couple also has a son named Ryan, who was born in 2005. The Nene family celebrates Ryan's birthday on March 8.

Madhuri Dixit made her debut with Abodh in 1984. The actress has worked in many popular films such as Tezaab, Hum Aapke Hain Koun!, Parinda, Saajan, Beta, Anjaam, Raja and Dil Toh Pagal Hai among others. She was last seen in Karan Johar's production venture Kalank in 2019.