Ajay Devgn has shared a cheeky video of his son Yug 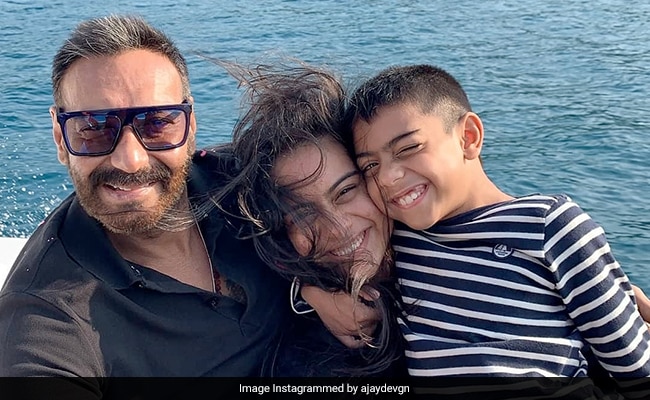 That Ajay Devgn is a doting father comes as no surprise. In fact, much of Ajay's social media posts are dedicated to the two great loves of his life – acting and family. Further proof of this is the star's latest Instagram upload. The actor has dropped a video recorded by him featuring his son, Yug Devgan. The cheeky clip features Yug with two glasses of water in his hands, with the little one drinking from both. That's not all. Yug even has a reminder for his father's Instafam. As he sips water from both glasses, Yug says, “Stay hydrated.” That's some solid advice, don't you think?

In the caption, Ajay Devgn said, “A reminder from the li'l one.”

A few weeks ago, Ajay Devgn also showered love on his daughter, Nysa Devgan on the occasion of her birthday. “Hey daughter, you are special. Today, tomorrow, forever. Happy birthday, Nysa. Privileged to have you.”

Much like Ajay Devgn, his wife, superstar Kajol too shares pictures and videos of her children. On Nysa's birthday, mom Kajol dropped a candid click of the birthday girl and said, “Happy birthday, baby. May your smile always light up the world like it does mine…you're simply the best.”

On the occasion of Christmas last year, Kajol shared an image with her son Yug. In it, the two are sharing a hug. In the caption, Kajol, being her usual witty self, said, “Made the boy and the sweater.”

Here's another image of Yug shared by Kajol on his 11th birthday. In the caption, she said, “All of 11 and the smile in my heart always.”

On the work front, Ajay Devgn was last seen in Runway 34 with Rakul Preet Singh and Amitabh Bachchan. This year, he also appeared on the web series Rudra. Meanwhile, Kajol was seen in the Netflix film, Tribhanga with Tanvi Azmi and Mithila Palkar.