Lakme Fashion Week: Esha Deol Walks Out After Being Interrupted By Organisers 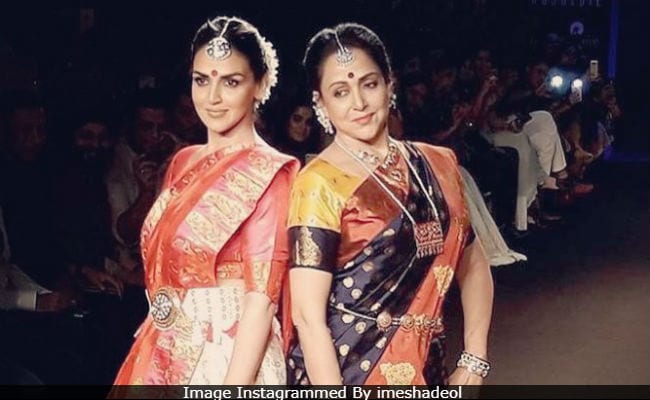 Hema Malini and her daughter Esha Deol walked the ramp for designer Sanjukta Dutta over the weekend at the Lakme Fashion Week in Mumbai. After the ramp walk, the mother-daughter duo, wearing beautiful Assamese silk saris, interacted with the media backstage, wherein Hema Malini spoke about their outfits and Esha's upcoming film Cakewalk. As soon as she handed over the mic to Esha, the anchor interrupted and categorically mentioned that it's not a media interaction but a photo op and asked the designer to take over. In the videos going viral on social media, Esha Deol, visibly upset, walked off, followed by mother Hema Malini.

"Walking the ramp with my most comfortable partner my mother Hema Malini for the awesome talented designer Sanjukta Dutta! Our best wishes to you," Esha had posted after the show.

Of making an appearance with Hema Malini at the Lakme Fashion Week, Esha earlier told news agency IANS, "I am very excited to be back on the ramp with my mom Hema Malini for designer Sanjukta Dutta to promote my film Cakewalk, directed by Ram Kamal Mukherjee. The film deals with a certain issue which every women and men in our country will be able to relate."

Cakewalk is a short film that tracks the story of a chef Shilpa Sen, played by Esha, who juggles between her professional and personal lives.

Esha Deol hasn't made any screen appearance after 2015's Kill Them Young. She is married to businessman Bharat Takhtani. The couple are parents to daughter Radhya.