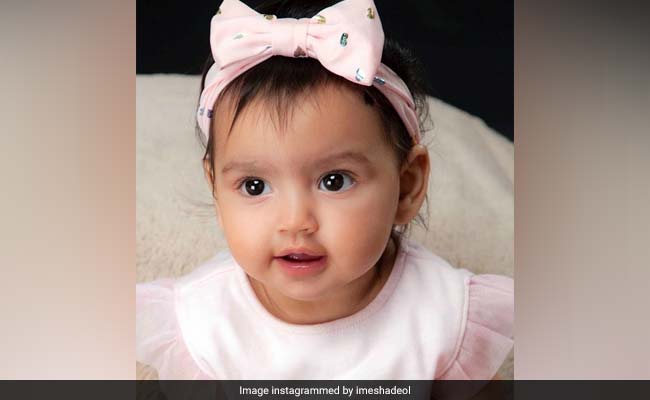 New Delhi: Finally, actress Esha Deol shared the first picture of her daughter Radhya, who was born last October. Esha Instagrammed a beautiful photo of little Radhya, looking cute as a button in a pink dress and matching headband. "Radhya Takhtani, our darling daughter," the actress captioned the post, adding a heart emoticon. (Radhya is truly an angel). Esha Deol and husband Bharat Takhtani welcomed a baby girl on October 20 in Mumbai. Radhya is the couple's first child. Radhya's adorable picture has been liked by Esha's colleagues such as Abhishek Bachchan, Amrita Arora and Tusshar Kapoor. "Too cute," reads Abhishek's comment.

Her name Radhya has been derived from Goddess Radha, read a statement issued on behalf of the family. "We are very happy to announce that our daughter will be named as Radhya Takhtani. The name has been jointly decided by Esha and me," Bharat Takhtani told news agency IANS after her birth.

When Radhya had turned one-month-old, Esha shared a picture of her little munchkin's footprints.

Before Radhya's birth, two baby showers were held for Esha. The first ceremony was as per Sindhi traditions while her second baby shower was hosted by her younger sister Ahana.

Esha Deol, 36, is the daughter of star couple Hema Malini and Dharmendra. Her younger sister Ahana is married to businessman Vaibhav Vohra and the couple are parents to son Darien.

Promoted
Listen to the latest songs, only on JioSaavn.com
Esha Deol, last seen in 2015's Kill Them Young, is all set to make a comeback this year with short film Cakewalk. "Honestly, my priority is my daughter Radhya now. I have requested my husband to take a break for a few days and just be with Radhya while I wrap up the shoot in one schedule. And I am lucky to have someone like Bharat," she told IANS.