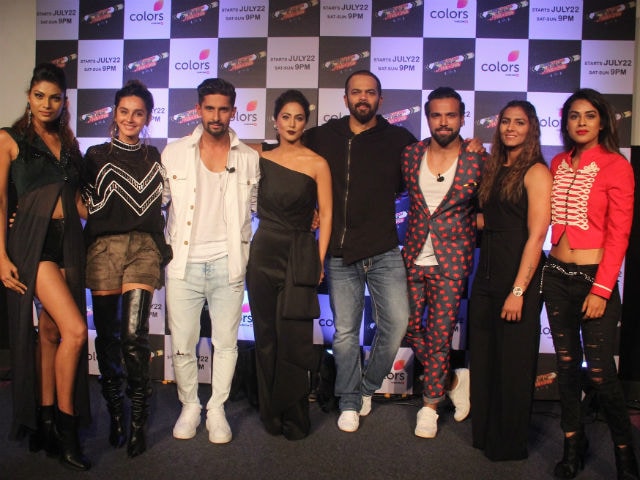 Rohit Shetty with the contestants of Khatron Ke Khiladi

New Delhi: Khatron Ke Khiladi host Rohit Shetty says that the stunt-based reality show is 'mentally taxing,' reports news agency PTI. Rohit Shetty's films like the Singham series and Dilwale and comedy films like the Golmaal series and Bol Bachchan are replete with cutting-edge action sequences and stunts. Then what made the director make such a statement about Khatron Ke Khiladi? "When you are performing with stuntmen or Ajay, who has been doing stunts for many years, you're not that stressed out. But on the show you have twelve people who have never done stunts. You are making them perform stunts. There is stress, because you need to take care and make sure nothing goes wrong," he told PTI.

Celebrities like Geeta Phogat, Hina Khan, Lopamudra Raut, Manveer Gurjar, Shantanu Maheshwari, Shiny Doshi, Rithvik Dhanjani, Ravi Dubey, Nia Sharma, Monica Dogra, Shibani Dandekar and Karan Wahi are participating in this season. The show will feature a mix of stunts featuring not only heights, water, creepy crawlies and wilderness, but also some of the wildest experiences that will keep you on the edge of your seats. Also another thing that adds up to the thrill, is the drama introduced by Rohit Shetty. "There should be a little bit of drama between each segment. We wanted it to be more entertaining for the audience," he told PTI.