Khatron Ke Khiladi 8: Nia Sharma Is 'Bruised' But She's Going For The Kill

Khatron Ke Khiladi 8 contestant Nia Sharma posted a picture of herself on Instagram and wrote in caption: "A body full of bruises but barely any that hurts only because you took them with pleasure" 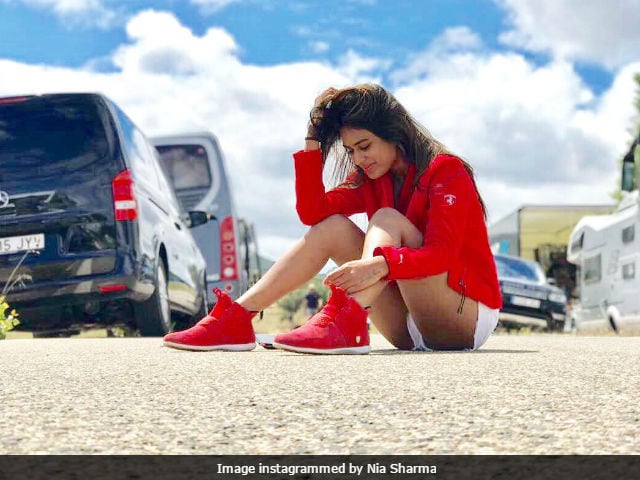 New Delhi: Actress Nia Sharma is globetrotting while she's shooting for television reality show Fear Factor: Khatron Ke Khiladi 8. Nia Sharma, who became a household name after starring in shows like Ek Hazaaron Mein Meri Behna Hai and Jamai Raja, shared a picture from Spain, which she captioned: "A body full of bruises.. but barely any that hurts only coz u took them with pleasure #kkk8 (sic)" Nia's Instagram diary from her Khatron Ke Khiladi 8 tour put her on top of the trends list on Wednesday. Monica Dogra, former co-star Ravi Dubey and Rithvik Dhanjani, who are also contesting for the winner's trophy, feature regularly in the pictures instgrammed by Nia.

A body full of bruises..but barely any that hurts only coz u took them with pleasure #kkk8

This picture has a story 'Mo'...!! @monicadogra on point;) #kkk8 #newfoundlove

After starring in several television soaps Nia Sharma shifted her focus to web series. She made a bold comeback in Vikram Bhatt's Twisted co-starring Namit Khanna. Of her shift to web series, Nia told news agency IANS: "TV isn't a wide medium when it comes to boldness on the small screen because of the audience. It reaches out to the audience but keeping the traditions intact. The only medium where people are truly exploring themselves and going out to experiment is the digital space."

Promoted
Listen to the latest songs, only on JioSaavn.com
In February, Nia Sharma shared a video from a photoshoot in which commenters tagged her as "shameless", "cheap" and "empty person." Nia was also accused of being an attention seeker.