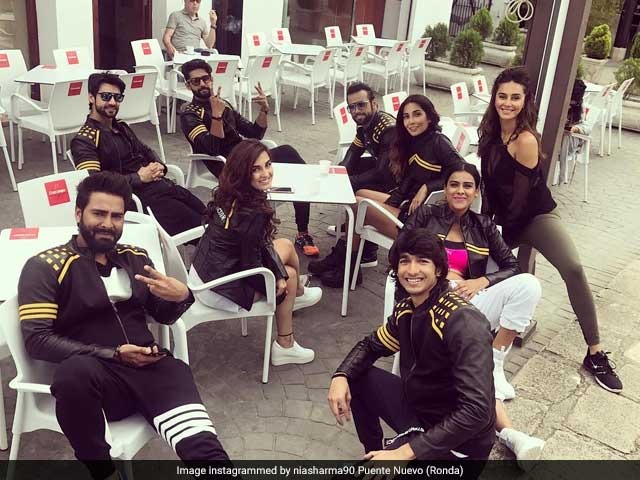 New Delhi: Khatron Ke Khiladi contestants are having a blast in Spain, where the eighth season of the adventure reality show is being shot. Contestants who arrived in Spain recently, have been regularly blogging on social media, sharing highlights of their stay in the country. Bigg Boss 10 winner Manveer Gurjar, ex-Bigg Boss contestant Lopamudra Raut and TV actress Nia Sharma are particularly active on Instagram. In pictures shared by the contestants, wrestling champ Geeta Phogat also features in signature Fear Factor outfits. Meanwhile, Rithwik Dhanjani, Shantanu Maheshwari and Karan Wahi ensures their swag game is on point. Actress Hina Khan has a message for her fellow contestants, "And the journey begins.. love power protection and strength to all of us." Other contestants of the show include Shibani Dandekar, Monica Dogra, Shiny Doshi and Ravi Dubey.

Team Khatron Ke Khiladi are not only gearing up for an adrenaline-pumping experience but also giving off major bhangra vibes in Spain. Take a look at the posts below, curated for you.

Knew nothing about stunts, but we surely rocked our bhangra session in #spain !! #kkk8 #bhangramusic

Ahead of the show kicking off, beach babies Lopamudra Raut and Nia Sharma enjoyed themselves by the pool, in style of course.

Ironically, the hardest part of a pool is 'water' !! #spaintravel #kkk8

Take me to the water..! Resort wear by @rsbyrippiisethi thanks girl it's a pretty one

Promoted
Listen to the latest songs, only on JioSaavn.com
Those who were expecting to see Arjun Kapoor host the show will be disappointed. Of Arjun, who just released Half Girlfriend and will next be seen in Mubarakaan, his spokesperson told news agency PTI: "Arjun Kapoor hosted the reality show, Khatron Ke Khiladi last year. However this year he won't be able to host the show for the second time as his hands are full with three films."