Katrina Kaif, Siddhant Chaturvedi And Ishaan Khatter Never Have A Dull Day On The Sets Of Phone Bhoot

Have you met Katrina Kaif's "gang"? 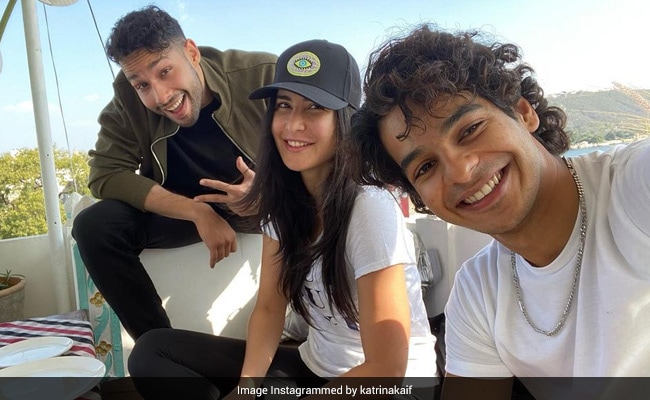 Katrina Kaif and her "gang" is here to make your day brighter. We are talking about the latest Instagram entry of the actress that features her along with her Phone Bhoot co-stars Siddhant Chaturvedi and Ishaan Khatter. In the BTS album shared by Katrina Kaif on Thursday, the trio can be seen having a great time together. Katrina and Ishaan can be seen twinning in white outfits together. In another shot, the co-stars can be seen goofing around and happily posing with the film's producer Riteish Sidhwani. KKatrina Kaif captioned the post: "Gang." She added the phone, ghost and a smiley emojis. Within a few minutes, her post was filled up with heart emojis from het fans.

Without much ado, take a look at Katrina Kaif's post here:

Earlier this week, Siddhant Chaturvedi and Ishaan Khatter shared a fun-filled video and they asked their co-star Katrina Kaif to "come work out with the boys." To which she replied in the comments section, "You guys have done more shooting then me today." This is the post we are talking about:

Announcing their association with the project, the actors shared a poster from the film last year. Katrina Kaif wrote in her caption: "The one stop shop for all bhoot related problems, Phone Bhoot ringing in cinemas in 2021."

Phone Bhoot, directed by Gurmmeet Singh, will mark Katrina Kaif, Ishaan Khatter and Siddhant Chaturvedi's first film together. It is being backed by Excel Entertainment and is slated to release this year.