"So happy to be with my boys again," wrote Dhanush 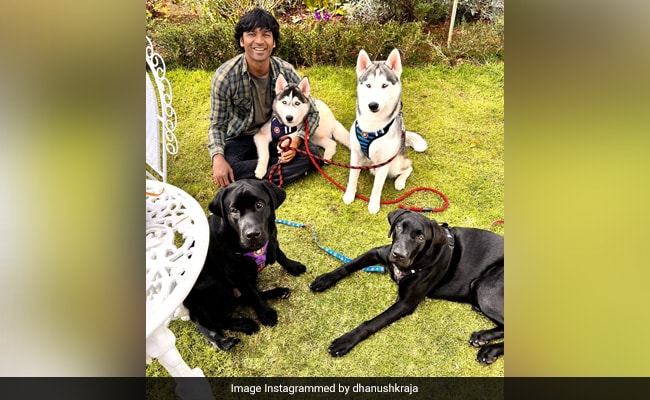 If Dhanush's latest Instagram entry doesn't compell you to say aww, we don't know what will. On Monday, the actor posted an adorable picture with his pet pooches King, Kong, Genghis and Caesar. The actor's smile in the picture says it all. He captioned the post: "A long due reunion. So happy to be with my boys again. " He added the hashtags #king, #kong, #genghis and #caesar to his Instagram profile. The picture got a whole lot of love from the actor's Instafam. Actor Elli Avrram dropped heart-eyed emojis. The comments section was filled up with heart emojis and we are not surprised at all.

The actor loves to share posts from different facets of his life. Last month, he shared a picture of himself with his son Yatra and he wrote: "Now, where have I seen this before ?" He added the hahstags #yathradhanush and #naanevaruven.

In January this, Dhanush and filmmaker Aishwaryaa  announced their separation after 18 years of togetherness. They got married in 2004 and are parents to two sons. They announced their separation with a joint statement that read, "18 years of togetherness as friends, couple, as parents and well-wishers to each other... The journey has been of growth, understanding, adjusting and adapting. Today we stand at a place where our paths separate... Aishwaryaa and I have decided to part ways as a couple and take time to understand us as individuals for the better. Please do respect our decision and give us the needed privacy to deal with it."

Dhanush, a popular name in the Tamil film industry, made his Bollywood debut with Aanand L Rai's Raanjhanaa. He recently featured in another film by the director titled Atrangi Re, co-starring Akshay Kumar and Sara Ali Khan. Last year, Dhanush received a National Film Award in the Best Actor category for Asuran.

Dhanush and Aishwaryaa worked together in 3, which marked the latter's directorial debut. The psychological thriller featured a song called Kolaveri Di, that became insanely popular.

For Vijay Deverakonda, Food Tops The List. We Have Proof