"When you can't go to the studio so you make it come to you," Janhvi captioned her Instagram story featuring Khushi. 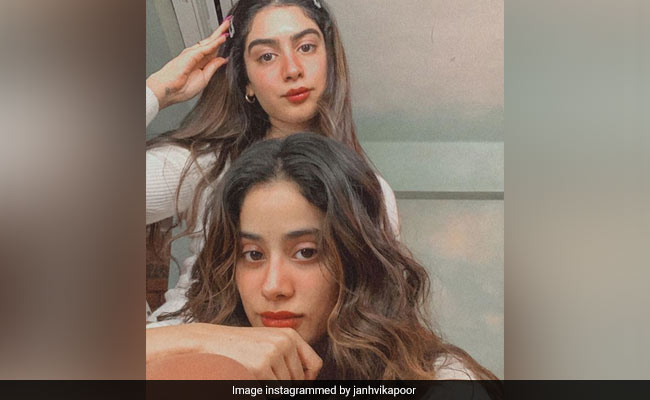 Janhvi and Khushi in a selfie (courtesy janhvikapoor)

Janhvi Kapoor comes up with all sorts of crazy ideas. Janhvi would rather create a make-shift studio at home than step out of her house for a photoshoot and that's exactly what she did recently. The 23-year-old actress shared a glimpse of her DIY studio at home and it looks pretty cool. Posing for Janhvi in her new make-shift studio was her partner-in-crime sister Khushi Kapoor - the sisters used a plain cloth as the backdrop, fixed to the wall with scotch tape. LOL. "When you can't go to the studio so you make it come to you," Janhvi captioned her Instagram story and we can't wait to see the end results of the photoshoot. But first, here's what Janhvi shared: 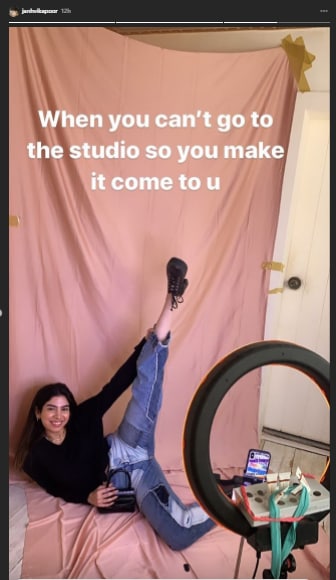 Janhvi Kapoor loves to try out new and cool features and apps when it comes to photoshoots at home. As per her own admission, when she discovers something new, she goes a little "crazy."

It's not just photoshoots that's been keeping Janhvi Kapoor busy these days - she has also "been trying to be a painter this past week." Janhvi shared this cute photo of herself from another studio - her make-shift painting studio.

Been trying to be a painter this past week 🎨❤️🌈

While Khushi maintains a private Instagram profile, there are plenty of glimpses of the Kapoor siblings' shenanigans on Janhvi's feed. Janhvi even described Khushi as her new favourite Director Of Photography: "Meet my new fav DOP. Great at lighting, angles and mid shoot cuddles and giggles."

And here's a "quarantine edition" of "How to annoy you sister." Janhvi did well. LOL.

How to annoy your sister 101 #quarantineedition 👯‍♀️

Janhvi Kapoor was last seen in Gunjan Saxena: The Kargil Girl, which premiered on Netflix. Her list of upcoming movies include Roohi Afzana, Dostana 2 and Takht.