Janhvi and Khushi Kapoor spent some time goofing around on camera 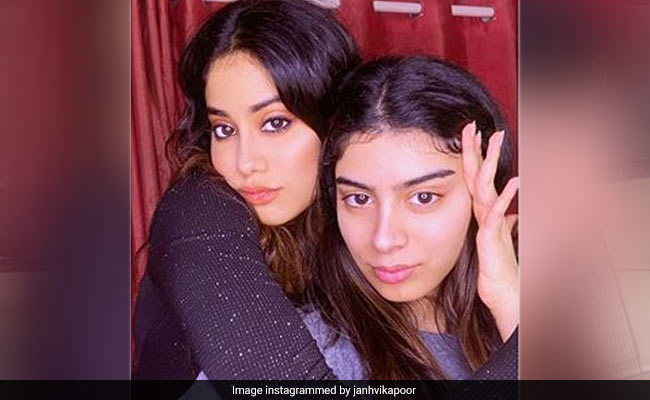 Missing celebrity photoshoots? Well, Janhvi and Khushi Kapoor have got you covered. Janhvi Kapoor shared pictures taken by her favourite director of photography (DOP) - her sister Khushi. Janhvi and Khushi huddled up to take some fabulous selfies and the former shared them on Instagram and captioned it: "Meet my new favourite DOP. Great at lighting, angles and mid shoot cuddles and giggles." Janhvi and Khushi are daughters of late actress Sridevi and filmmaker Boney Kapoor. Janhvi Kapoor is a bona fide actress while Khushi is studying films in New York. She returned to India shortly before the nationwide lockdown was announced due to the coronavirus outbreak in India.

Here are the Kapoor sisters at their quirky best:

Janhvi Kapoor debuted in 2018 film Dhadak and went on to sign plum projects such as Gunjan Saxena: The Kargil Girl, Takht and Dostana 2 - all backed by Karan Johar's Dharma Productions. She also featured in Karan Johar's segment of film anthology Ghost Stories. Outside the banner, she will be seen in RoohiAfza opposite Rajkummar Rao.

Recently, a video of Khushi Kapoor, in which she talks about finding her footing in the film industry before working with her family, went viral. In the video shared by several fan clubs, Khushi talks about her love for cinema and says, "I would definitely love to work with my family at some point in the future. I would like to prove myself and prove my place before I jump into working with my family. There's really no other way to go about it than to immerse yourself into it."

Meanwhile, Janhvi Kapoor's Gunjan Saxena: The Kargil Girl, directed by Sharan Sharma, is slated for a digital release on Netflix.