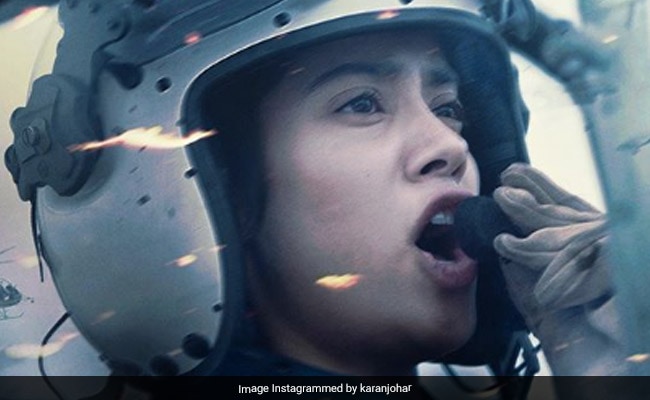 Janhvi Kapoor in a still from Gunjan Saxena: The Kargil Girl. (courtesy karanjohar)

Jahnvi Kapoor's next film, Gunjan Saxena: The Kargil Girl, will go straight to a streaming platform just like Amitabh Bachchan's Gulabo Sitabo before it. The biopic of one of the first two Indian women pilots in a combat zone will release on Netflix, it was announced on Tuesday. No release date has been revealed as yet. Janhvi, 23, will play the eponymous Gunjan Saxena who flew a helicopter during the Kargil War. Producer Karan Johar said in a statement on behalf of Dharma Productions, "Gunjan Saxena is a defining film based on a true story about a woman who showed unparalleled courage, and inspiration to many in the coming years. We are excited to partner with Netflix and share this fearless story about following your heart and your dreams with millions around the world."

Monika Shergill, VP-Content, Netflix, said in a statement, "We are focused on bringing the finest and most entertaining films to our members in India and around the world. Gunjan Saxena: The Kargil Girl is a story of pure courage and determination and we can't wait to premiere it on Netflix. Dharma Productions, Zee Studios and the entire cast and crew have come together to make this incredibly inspiring, must see film that will move and entertain everyone."

Shariq Patel, CEO, Zee Studios, said, "Gunjan Saxena: The Kargil Girl is a film we're immensely proud of. It's a film that inspires each one of us to push our own boundaries, step out of our comfort zones, and dare. We are excited that this inspiring story has found a home at Netflix, and I'm sure, it will touch millions of hearts across the world."

In what appears to be a growing trend in light of the COVID-19 pandemic and lockdown, Bollywood projects that are ready to release are opting to premiere on OTT platforms rather than in cinemas.

A teaser of Gunjan Saxena: The Kargil Girl was released on Tuesday, featuring photos of the real Gunjan Saxena with a voice-over by Janhvi Kapoor who appears in a couple of pictures as well. "Her inspirational journey made history. This is her story. Gunjan Saxena: The Kargil Girl, coming soon on Netflix," wrote Karan Johar on Instagram. Janhvi and other cast memebrs including Angad Bedi and Pankaj Tripathi also shared the teaser, as did Alia Bhatt, Arjun Kapoor, Anushka Sharma and Varun Dhawan. Take a look:

In a separate post, Karan Johar shared the poster of the film with the text "coming soon - Netflix."

Earlier, Janhvi Kapoor shared a picture with Gunjan Saxena and wrote, "Happy Birthday, Gunjan mam! Thank you for teaching me the true meaning of bravery, the importance of working hard and sincerely and for paving the way for millions of women in our country. You're an inspiration and a hero, without ever having tried to be. Your story has helped me believe in myself, and hopefully will help others too."

Happy Birthday Gunjan mam! Thank you for teaching me the true meaning of bravery, the importance of working hard and sincerely and for paving the way for millions of women in our country. You're an inspiration and a hero, without ever having tried to be. Your story has helped me believe in myself, and hopefully will help others too. 🇮🇳

Directed by Sharan Sharma, the film is based on a 1999 NDTV report on India's first women combat aviators. In 1999, Flight Lieutenant Gunjan Saxena and Flight Lieutenant Srividya Rajan operated in the Kargil war zone, flying Cheetah helicopters. Towards the end of the war, NDTV's Vishnu Som and camera person Manvendar Gautam flew with Flt Lt Saxena from Uddhampur airbase; some few years ago, the director of the film, Sharan Sharma reached out to the NDTV team for details, which led to the development of the film. Take a look at NDTV's report on Gunjan Saxena and Srividya Rajan here: