It's Pool O'Clock For Karisma Kapoor. See What She Posted 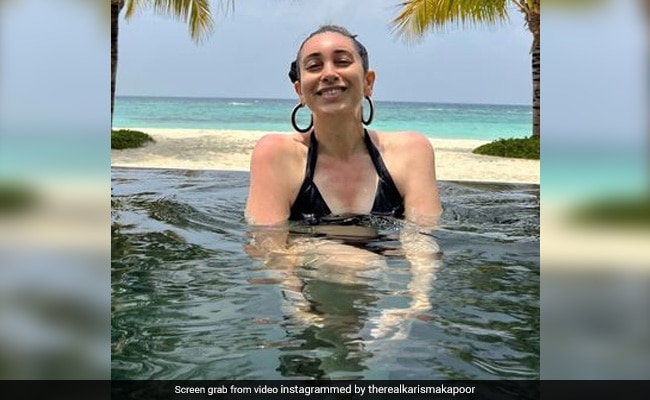 Karisma Kapoor in a still from the video. (courtesy: therealkarismakapoor)

Karisma Kapoor, on Wednesday afternoon, shared a video from her pool session on Instagram. The 48-year-old actress picked the perfect song to go with it. Karisma Kapoor, swimming in the pool, captioned her video, "End of summer" and she found the perfect Taylor Swift song to go with it - August. In the comments section of her post, Karisma's cousin (Neetu and Rishi Kapoor's daughter) Riddhima Kapoor Sahni dropped a couple of heart emojis. For her swim session, Karisma Kapoor picked black swimwear and accessorised it with a pair of hoop earrings.

Karisma Kapoor's Instagram profile is a sheer delight. A couple of days ago she shared this "unfiltered" post and captioned it: "Undiscovering Mumbai #mumbairains #nofliter."

Karisma Kapoor's throwback game is equally strong. "Love the 90's, this hair though #flashbackfriday #crazyhairdidntcare," she captioned this one.

Here's another one. Karisma Kapoor captioned it: "The days of chiffon sarees and a smile. Do you remember the film ? Hint : it was a love triangle #guessinggame #flashbackfriday."

On the work front, Karisma Kapoor was last seen in the 2012 film Dangerous Ishhq, after which she featured in special roles in films such as Bombay Talkies and Zero. Karisma Kapoor's last project was ALTBalaji's web-series Mentalhood. She will soon star in a project titled Brown, which she announced on her Instagram profile earlier this year.

Karisma Kapoor's breakout film was the 1996 romantic-drama Raja Hindustaani, opposite Aamir Khan. She featured in several hit films including Dil To Pagal Hai, Judwaa, Biwi No 1 among others. Apart from commercially successful films, Karisma also starred in critically acclaimed movies like Zubeidaa and Fiza to name a few. Karisma Kapoor belongs to a family of actors. She is the daughter of actors Randhir Kapoor and Babita. She is the granddaughter of legendary actor and filmmaker Raj Kapoor and the great-granddaughter of Prithviraj Kapoor. Her sister Kareena, cousin Ranbir Kapoor are also successful Bollywood actors.