Don't know about you, but we can totally relate to the actress 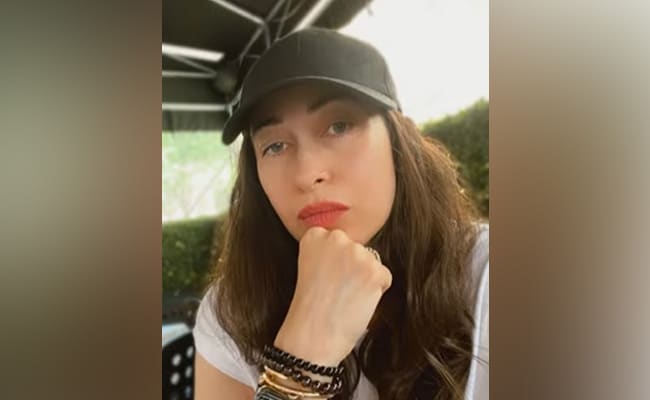 A still from the video. (courtesy: therealkarismakapoor)

Karisma Kapoor's Instagram page is all about fashion, food, and travel. She just loves to keep us posted by sharing snippets from her daily activities. And, now, she has shared a video about what happens when her food gets delayed. All we can say is that the clip is oh-so-relatable. The Instagram Reels opens with Karisma looking at herself in a selfie camera set up. She is giving chic look vibes in a white T-shirt and a black cap. A few seconds later, the actress is flaunting her blood-red lip shade. It is followed by a bunch of weird yet hilarious frames. “Waiting for my food like,” Karisma has written in the sidenote along with laughing with tears emoji and a face with tongue out emoji. Don't know about you, but we can totally relate to the actress.

Have a look at this oh-so-relatable clip:

Karisma Kapoor tries to keep her social media appearance as real as possible. Why do we say so? A few days ago, she shared a snap of herself, minus the makeup. The actress looks beautiful in her “natural” element. Sharing the selfie with her fans, Karisma said, “Mood is au natural.”

There is no one better than Karisma Kapoor when it comes to taking selfies. Don't believe us? Karisma's “50 shades of grey” post is just another proof of it.

Karisma Kapoor recently came back after a long trip, spreading her inimitable charm and cheer in London and New York. The actress kept her fans updated with her shenanigans in the foreign land. One such example is this video of Karisma Kapoor dancing on the streets of New York. In the clip, Karisma is dressed in a black shirt and pants. She added the song Empire State Of Mind by Jay-Z and Alicia Keys in the background. “These lights will inspire you,” Karisma's caption read.

Karisma Kapoor will be next seen in an OTT project titled Brown. It is based on the book City of Death by Abheek Barua.