Into The Blue: A Pic From Neha Dhupia And Angad Bedi's Maldives Vacation

"We made some good memories," wrote Angad Bedi 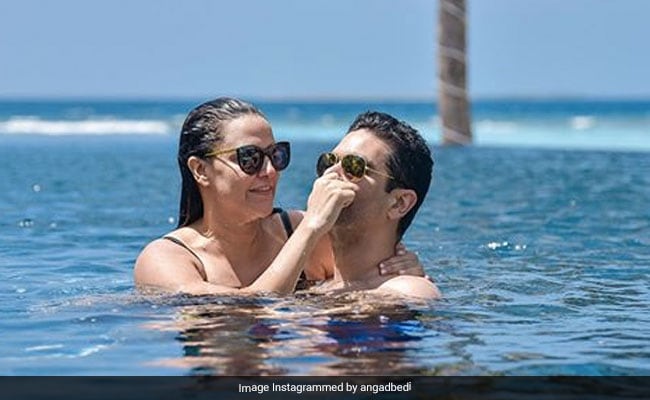 Neha Dhupia and Angad Bedi's Instagram profiles are flooded with posts from their Maldives vacation. The couple, who have been actively sharing pictures from their getaway, added another one to their collection and it will surely turn you green with envy. In the picture, the couple can be seen making the most of their me time in the blue waters of Maldives. Angad Bedi, sharing the pictures on Instagram, wrote in his caption, "Thank you Movenpick Kuredhivaru Maldives for a lovely trip and such warm hospitality. We made some good memories... Until next time." He added the hashtags #vacation #maldives #family. In the comments section of Angad's post, Neha wrote: "Let's go back."

Thank you @movenpickkuredhivarumaldives for a lovely trip and such warm hospitality. We made some good memories.. until next time.. @nehadhupia #vacation #maldives #family

ICYMI, here are some more pictures from their Maldives vacation:

Neha Dhupia married Angad Bedi at a private ceremony in New Delhi in 2018. The couple welcomed their daughter Mehr in the same year. Angad Bedi recently featured in the biopic Gunjan Saxena: The Kargil Girl, which stars Janhvi Kapoor in the titular role. He also stars in Mum Bhai, which will stream on ALTBalaji and Zee 5 from November 12.

In terms of movies, Neha Dhupia was last seen in the short film Devi, alongside Kajol and Shruti Haasan. She features as one of the gang leaders on TV reality show Roadies Revolution. Neha, a former beauty queen, is best-known for her performances in films such as Singh Is King, Hindi Medium, Tumhari Sulu and Lust Stories among many others. She currently hosts her talk show No Filter Neha season 5.