Neha Dhupia Is Chilling Like A Villain In Maldives. See Pics 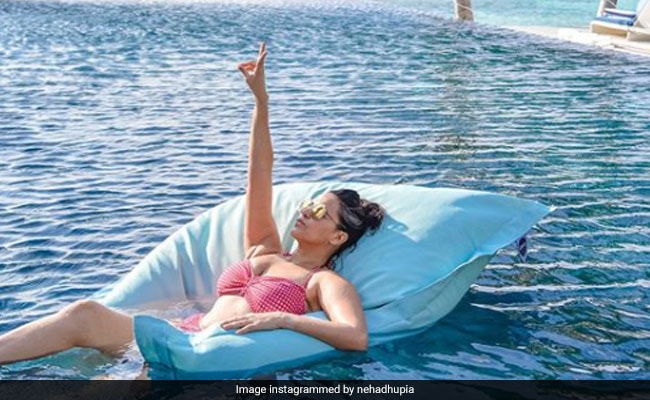 Neha Dhupia is having the best time of her life in the Maldives. The actress, who took off to her holiday with husband and actor Angad Bedi and daughter Mehr, has been adding stunning pictures to her vacation diaries on Instagram. In her latest post, Neha Dhupia can be seen chilling like a villain in a pool in Maldives. She looks gorgeous in a polka-dot bikini while sunbathing on a pool pillow. The crystal-clear waters and mesmerising view in the backdrop made the picture postcard-worthy. Sharing the pictures, Neha Dhupia wrote: "Maldives." Within minutes, the actress' fans showered her post with love.

Neha Dhupia and Angad Bedi's recent posts from their vacation will surely make you green with envy. A couple of days ago, the actress posted beautiful pictures of herself happily posing in a printed outfit. "Anyone else feelin those Monday blues like I am," she captioned her post. Angad also treated his fans to some amazing pictures of himself relaxing in a pool.

Thank you all for the love you have shown towards the trailer of #MUMBHAI keep it coming.. I am on my much deserved #vacation movenpickkuredhivarumaldives

After reaching Maldives, the couple lit up Instagram with breathtaking pictures of themselves. "Angad Bedi spotted in Maldives with a woman in black bikini and face covered ... should I be worried?" Neha wrote while Angad captioned his post like this: "#Maldives state of mind! With the Mrs. #vacation #holiday."

Neha Dhupia was last seen in Priyanka Banerjee's short film Devi, in which she co-starred with Kajol, Shruti Haasan, Neena Kulkarni and Shivani Raghuvanshi. Angad Bedi's last film was Gunjan Saxena: The Kargil Girl, in which he starred alongside Janhvi Kapoor.