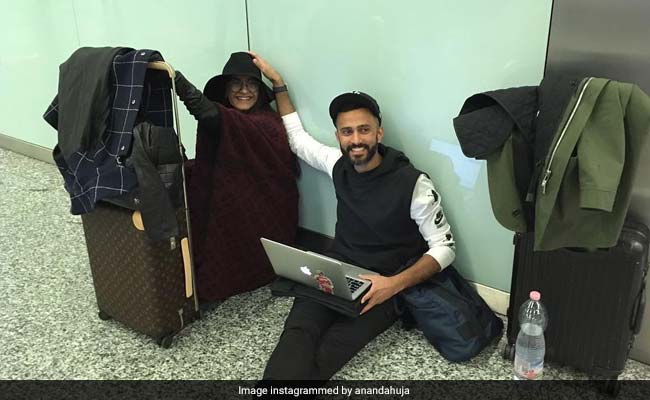 Anand Ahuja'a latest Instagram post will surely make you go "aww." On Thursday, Anand shared a loved-up picture of himself along with his wife Sonam Kapoor and accompanied it along with a super cute caption. "Airport Shenanigans with my bunny. #TBT," read the caption on Anand's post. In the picture, Anand can be seen playing with Sonam's hat as she sits on the floors along with her luggage and can be seen smiling with all her heart. Sonam Kapoor can be seen dressed in an over-sized outfit. She can also be seen dressed in a black hat and a pair of glasses and she looks simply stunning in the picture.

Don't they look adorable in the picture?

We just can't seem to get enough of the couple's Instagram PDA. Remember the post, in which Anand wrote: "Unbelievable, Sonam Kapoor! Every week you do something that just out does what you did the week before." Sonam's reply on the post was equally cute. She replied: "Baby so embarrassing ya... But I missed you so much by my side."

Unbelievable @sonamkapoor! ... Every week you do something that just out does what you did the week before!... this time at @fashiontrustarabia. So proud of you, inspired by you and grateful for you! ... PS @rheakapoor you're @germanlarkin

Sonam Kapoor frequently expresses her love for Anand on social media. A few days ago, she posted a lovely picture along with her husband and summed it up as "Nothing compares to you." So cute, no?

Sonam Kapoor was last seen in Shelly Chopra Dhar's romantic drama Ek Ladki Ko Dekha Toh Aisa Laga, alongside her father Anil Kapoor and Rajkummar Rao. Her next film is Abhishek Sharma's The Zoya Factor, co-starring Dulquer Salmaan, in which she plays the role of an advertising agency executive.